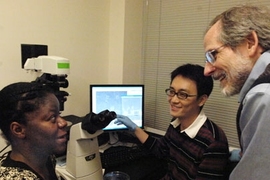 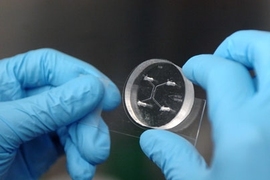 MIT engineers have built a device that gives them an unprecedented view of three-dimensional cell growth and migration, including the formation of blood vessels and the spread of tumor cells.

The microfluidic device, imprinted on a square inch of plastic, could be used to evaluate the potential side effects of drugs in development, or to test the effectiveness of cancer drugs in individual patients.

Roger Kamm, MIT professor of biological and mechanical engineering, and his colleagues reported their observations of angiogenesis --Â the process by which blood vessels are formed -- in the Oct. 31 online issue of the journal Lab on a Chip.

Microfluidic devices have been widely used in recent years to study cells, but most only allow for the study of cells growing on a flat (two-dimensional) surface, or else lack the ability to observe and control cell behavior. With the new device, researchers can observe cells in real time as they grow in a three-dimensional collagen scaffold under precisely controlled chemical or physical conditions.

Observing angiogenesis and other types of cell growth in three dimensions is critical because that is how such growth normally occurs, said Kamm.

Working with researchers around MIT, Kamm has studied growth patterns of many types of cells, including liver cells, stem cells and neurons. He has also used the device to investigate the pressure buildup that causes glaucoma.

The device allows researchers to gain new insight into cell growth patterns. For example, the researchers observed that one type of breast cancer cell tends to migrate in a uniform mass and induces new capillaries to sprout aggressively toward the original tumor, while a type of brain cancer cell breaks from the primary tumor and migrates individually but does not promote capillary formation.

The system is configured so that researchers can manipulate and study mechanical and biochemical factors that influence cell growth and migration, including stiffness of the gel scaffold, concentration of growth factors and other chemicals, and pressure gradients.

Two or three channels imprinted onto the plastic square contain either a normal cell growth medium or a chemical under study, such as growth factor. Cells growing in the scaffold between the channels are bathed in chemicals from the channels, and the effect of the chemicals can be evaluated based on various measures of cell function.

Kamm and his colleagues first described their microfluidic device in a January 2007 paper in Lab on a Chip. Vernella Vickerman, a graduate student in chemical engineering, and Seok Chung, a postdoctoral fellow in biological engineering, played critical roles in developing the device, Kamm said.

The research was funded by Draper Laboratory.