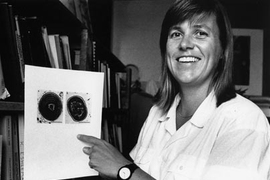 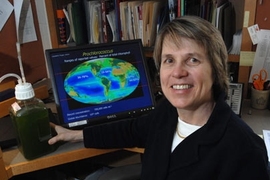 ↓ Download Image
Caption: Now, 20 years later, Chisholm holds a container filled with Prochlorococcus microbes. Its proliferation in the world is tracked on the screen behind her.
Credits: Photo / Donna Coveney

Caption:
Now, 20 years later, Chisholm holds a container filled with Prochlorococcus microbes. Its proliferation in the world is tracked on the screen behind her.
Credits:
Photo / Donna Coveney

A sea-dwelling microbe of global importance discovered only 20 years ago by researchers, including one at MIT, is the focus of a two-day "party" of sorts later this month.

The ProchlorococcusFest, to be held May 30-31 at MIT, will feature a range of talks highlighting past, current and future research on the smallest--and most abundant--photosynthetic organism in the oceans.

"It's been a really exciting ride," said MIT Professor Penny Chisholm, commenting on what's been learned about Prochlorococcus since it was first identified. The tiny cells--there are 100 million in a quart of seawater--are now known to play a key role in the ocean carbon cycle, which is important in climate regulation.

Chisholm, the Lee and Geraldine Martin Professor of Environmental Studies and Biology, was on the team that discovered the microbe and first described it in the journal Nature. Her co-discoverers are Robert J. Olson, Erik R. Zettler, and John Waterbury of Woods Hole and Ralf Goericke and Nicholas A. Welschmeyer, then at Harvard.

Chisholm, Olson and Waterbury will be attending the ProchlorococcusFest, which was co-organized by Chisholm and Professor Zackary Johnson '94 of the University of Hawaii, who began working on Prochlorococcus while a postdoc in Chisholm's lab.

Among other important Prochlorococcus research advances, scientists have sequenced the genomes of 12 different strains of the microbe. "If we can understand how this one cell evolved and assembles into these rich communities, we'll better understand microbial diversity in general," said Chisholm, who participated in some of the sequencing (see /newsoffice/2003/plankton.html).

That wealth of genomic data, all available on the public genome database, is facilitating new discoveries--and questions. For example, Chisholm said, "just a few weeks ago a fellow e-mailed me that he'd found a gene in Prochlorococcus that encodes an antibiotic. We didn't know that! What role is there for an antibiotic floating around in the ocean?"

Future research directions include understanding the role of viruses and predators in shaping the structure of the Prochlorococcus community. "Viruses are important not only as a source of mortality for Prochlorococcus, but also because they help move genes around, which is important to the evolution and stability of the system," Chisholm said. Another unknown? "We're just now starting to understand what eats Prochlorococcus."