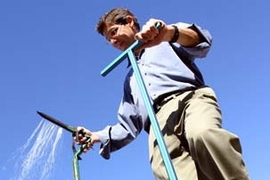 ↓ Download Image
Caption: Martin Fisher has won the 2008 Lemelson-MIT Award for Sustainability for his work helping lift African farmers out of poverty through a combination of technological invention and business development.
Credits: Photo courtesy / Lemelson-MIT Program

Caption:
Martin Fisher has won the 2008 Lemelson-MIT Award for Sustainability for his work helping lift African farmers out of poverty through a combination of technological invention and business development.
Credits:
Photo courtesy / Lemelson-MIT Program

Dr. Martin Fisher is transforming the lives of thousands of poor African farmers through a combination of technological invention and system-wide business development. In collaboration with his co-workers, Fisher, the 2008 recipient of the Lemelson-MIT Award for Sustainability, has already enabled over 310,000 people to rise out of poverty.

Fisher will accept his award and present his accomplishments to the public at the Massachusetts Institute of Technology during the second-annual EurekaFest, a multi-day celebration of the inventive spirit, June 25-28, presented by the Lemelson-MIT Program.

"By learning and understanding African societal needs and cultures firsthand, Fisher has harnessed the entrepreneurial drive of many Africans and empowered them with sustainable technological inventions," noted Joshua Schuler, executive director of the Lemelson-MIT Program.

According to the United Nations, more than 40 percent of Africans live in poverty, subsisting on less than US$1 a day. As co-founder and CEO of the nonprofit social enterprise KickStart, Fisher develops and markets moneymaking tools such as low-cost, human-powered irrigation pumps that improve the lives of small-scale rural farmers Ã˜ the majority of the poor in sub-Saharan Africa.

"These poor rural farmers have one asset: a small plot of land; and one basic skill: farming. The best business they can pursue is irrigated farming," Fisher explained. "Once they employ irrigation, the farmers can grow and sell high-value crops, like fruits and vegetables. They can grow year-round and reap four or five harvests, instead of waiting for the rain to grow a staple crop once or twice a year."

Making a difference with MoneyMaker pumps

Among the tools and devices designed and produced by Fisher and the KickStart team, the greatest impact comes from their line of MoneyMaker manual irrigation pumps.

Inspired by a treadle pump used in Bangladesh and India, these pumps are distinguished by features, which include easy installment and maintenance, portability, and pressurization to facilitate irrigation on hillside landscapes.

The Super MoneyMaker Pump, the most widely used model of these pumps, can pull water from a source (such as a pond, lake, stream, or well) as deep as 30 feet below the pump. It can then pressurize the water and spray it continuously to a height over 40 feet above the pump. It can also push water through a hosepipe for as far as 1,000 feet on flat ground, and it has the ability to irrigate as much as two acres of land. It retails for about US$100, and its users are earning an average of US$1,000 profit per year.

More recently, Fisher and his KickStart team invented the MoneyMaker Hip Pump, which is more affordable than the Super MoneyMaker Pump to lower barriers of entry to commercial irrigation. Unlike a treadle pump, its unique pivoted design allows the operator to pump water using his or her arms, legs, and body weight in an easy-to-use rocking motion. More than 4,300 farmers in Kenya, Tanzania, and Mali are already using this pump. The Hip Pump retails for about US$35; it can be used to irrigate over an acre of land, and its users are earning an average annual profit of US$650.

"The MoneyMaker pumps Martin designed are inspirational on many levels," said award nominator David M. Kelley, IDEO chairman and founder of the Hasso Plattner Institute of Design at Stanford University. "The inventions are remarkable in the huge impacts they have had on poverty and the lives of hundreds of thousands of poor farmers in Africa. They are an exceedingly simple solution to a very complex problem."

In 1984, while a doctoral candidate in mechanical engineering at Stanford University, Fisher traveled to Peru where he first witnessed rural poverty. The experience motivated him to explore ways technology and engineering could be applied to alleviate poverty. After completing his degree he won a Fulbright Scholarship to study technology-oriented solutions for rural poverty in Kenya. Fisher went for 10 months and stayed for 17 years. As he worked on traditional development projects for the first five years, he became increasingly disillusioned by the lack of sustainable impacts on poverty. In collaboration with fellow development worker Nick Moon, Fisher established ApproTEC - the organization that would become KickStart.

"The vast majority of development is about giving things away, and most development agencies see the poor as victims asking for help," Fisher explained. "At KickStart, we have a very different opinion of them. We see them as entrepreneurs. We see them as extremely hardworking people seeking the opportunity to get out of poverty."

Inventing something is only one step in the process of a successful innovation. Fisher knows this well Ã˜ he supports his inventions with a market-based development approach that 'kick-starts' a sustainable cycle of wealth creation. Fisher commercializes his inventions through a private sector supply chain, which is profitable for the manufacturers, wholesalers and retailers. Centralized manufacturing and a nationwide retail network ensure high quality, economies of scale, and locally available spare parts. KickStart will soon break ground on a new technology development center in Nairobi.

"In creating KickStart, Martin has created a model that is, by design, sustainable and easily replicated nearly anywhere in the world where people suffer grinding poverty," said award nominator Frances B. Emerson, vice president of corporate communications at Deere and Company. "Because of the quantum leap in income brought about by these technologies, the journey out of poverty is a one-way trip."

ABOUT THE LEMELSON-MIT PROGRAM
The Lemelson-MIT Program recognizes outstanding inventors, encourages sustainable new solutions to real-world problems, and enables and inspires young people to pursue creative lives and careers through invention. This June it will announce the 2008 winner of the $500,000 Lemelson-MIT Prize.

Jerome H. Lemelson, one of U.S. history's most prolific inventors, and his wife Dorothy founded the Lemelson-MIT Program at the Massachusetts Institute of Technology in 1994. It is funded by the Lemelson Foundation, a philanthropy that celebrates and supports inventors and entrepreneurs in order to strengthen social and economic life in the U.S. and developing countries. More information on the Lemelson-MIT Program is online at http://web.mit.edu/invent/.

ABOUT KICKSTART
KickStart is a non-profit organization that develops and markets new technologies in Africa. These low-cost technologies are bought by local entrepreneurs and used to establish highly profitable new small businesses. They create new jobs and wealth, enabling the poor to climb out of poverty forever. For more information, go to http://www.kickstart.org.