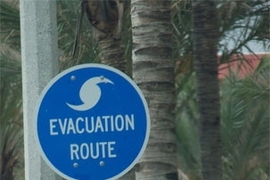 Hundreds of lives and hundreds of millions of dollars could potentially be saved if emergency managers could make better and more timely critical decisions when faced with an approaching hurricane. Now, an MIT graduate student has developed a computer model that could help do just that.

Michael Metzger's software tool, created as part of the research for his PhD dissertation, could allow emergency managers to better decide early on whether and when to order evacuations --Â and, crucially, to do so more efficiently by clearing out people in stages. The tool could also help planners optimize the location of relief supplies before a hurricane hits.

By analyzing data from 50 years of hurricanes and detailed information on several major ones, and by comparing the information available at various times as a hurricane approached with data from the actual storm's passage, Metzger said he was able to produce software that provides a scientifically consistent framework to plan for an oncoming hurricane. His approach uses the best available hurricane track models developed over the years, but even these can be wrong half of the time --Â a degree of uncertainty that further complicates the job for local emergency managers.

Because many of these managers have never had to confront the life-or-death realities of an approaching hurricane, they need a consistent analytical framework to consider the sequence of complex decisions that they need to make. For example, a poorly planned evacuation could cause roadway gridlock and trap evacuees in their cars --Â leaving them exposed to the dangers of inland flooding. As another example, ordering too many precautionary evacuations could lead to complacency among local residents, who might then ignore the one evacuation advisory that really matters.

"All in all, this is a complex balancing act," Metzger says.

The concept of evacuating an area in stages -- focusing on different categories of people rather than different geographical locations --Â is one of the major innovations to come out of Metzger's work, since congestion on evacuation routes has been a significant problem in some cases, such as hurricanes Katrina and Rita. Metzger suggests that, for example, the elderly might be evacuated first, followed by tourists, families with children, and then the remaining population. The determination of the specific categories and their sequence could be determined based on the demographics of the particular area.

By spacing out the evacuation of different groups over a period of about two days, he says, the process would be more efficient, while many traditional systems of evacuating a given location all at once can and have caused serious congestion problems. With his system, officials would get the information needed to "pull the trigger earlier, and phase the evacuation," he says, and thus potentially save many lives. Coincidentally, during the recent hurricane Fay in Florida, a modest version of a selective evacuation was implemented successfully when tourists were asked to leave while residents remained in place.

Other factors that could help to make evacuations more effective, he says, include better planning in the preparation of places for evacuees to go to, making sure buses and other transportation are ready to transport people, and preparing supplies in advance at those locations.

Metzger, who is a research assistant in the MIT Engineering Systems Division's Center for Engineering Systems Fundamentals, and a PhD student in the Operations Research Center, received a second-place award out of more than 100 entries from the U.S. Department of Homeland Security earlier this year for the work.

He has already discussed his conclusions with federal and state emergency officials, who said they are interested in adopting the new methodology. The hope is that they will initially use it side by side with their existing procedures, in order to track exactly how the results would compare, Metzger says. It is possible that his methods, implemented as a visually appealing computer program, could be used as a "cockpit training tool" for local emergency managers.

His adviser Richard Larson, Mitsui Professor of Engineering Systems and of Civil and Environmental Engineering, says Metzger's approach "embodies elements of engineering, management and the social sciences." For example, while much of the work was strictly mathematical in the analysis of decision-making strategies, there was also a strong component of sociology involved in evaluating people's responses to false-alarm evacuations.

Metzger has discussed the work with officials in South Africa, and also received an award from the National Science Foundation's graduate student conference. He plans to refine the software further over the course of the next year or so.