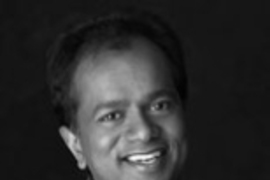 Vice President for Research and Associate Provost Claude Canizares today announced the appointment of Ram Sasisekharan as the new director of the Harvard-MIT Division of Health Sciences & Technology at MIT.

"It is with great pleasure that I announce the appointment of Professor Ram Sasisekharan as director of the Division of Health Sciences and Technology at MIT. Professor Sasisekharan will also become the Edward Hood Taplin Professor of Biological Engineering and Health Sciences & Technology. The appointment is effective Dec. 10, 2008," Canizares said. "Professor Sasisekharan brings a tremendous depth and breadth of experience to HST, having bridged across disciplines and between universities, government and industry."

Sasisekharan, currently the Underwood-Prescott Professor of Health Sciences and Technology and Biological Engineering at MIT, is a member of the Koch Institute for Integrative Cancer Research and the Center for Environmental Health Sciences. He joined the MIT faculty in 1996, following appointments as an instructor at HMS and as an HST postdoctoral fellow. He holds a PhD in medical sciences from Harvard Medical School, an MS in biophysics from Harvard University and a BS in physical sciences from Bangalore University in India.

Sasisekharan's research objective is to contribute to the discovery and distribution of therapeutics that alleviate suffering and promote human health. His research is highly multidisciplinary, integrating a broad range of technologies for the study of complex polysaccharides that are involved in many disease processes. His work has laid the foundation for the development of novel therapeutics for applications to problems as diverse as stroke and bird flu, and which has led to the creation of several companies.

"Professor Sasisekharan has received many honors, holds numerous patents, and has been a leader in the development of highly successful interuniversity research programs," Canizares said. "Just last year, he successfully galvanized an international team of researchers to rapidly identify the toxic contaminant in batches of the blood-thinner heparin that had caused dozens of deaths. This work potentiated methodologies to prevent such contaminations in the future, and resulted in the critical joint publication between the FDA and academic researchers." A follow-up study to this research was published in the New England Journal of Medicine on Dec. 4, 2008.

Sasisekharan will share the leadership of HST with David E. Cohen, the director for HST at Harvard, associate professor of medicine and HST at Harvard Medical School, and director of hepatology at Brigham and Women's Hospital.

"The integration of science, medicine and engineering -- the founding principle of HST -- is at the core of Ram's research," Cohen said. "I look forward to working with him to perpetuate the tradition of excellence within HST and to shape its bright future."

"HST produces some of the best minds in translational medicine, and it is poised to contribute much more to the advancement of human health," Sasisekharan said. "As director, I will work to collaborate with my colleagues to sustain an exciting intellectual environment for our graduate students and research pioneers."