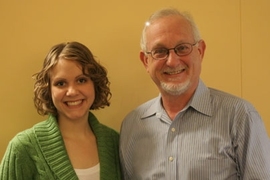 Construction of new coal-fired power plants in the United States is in danger of coming to a standstill, partly due to the high cost of the requirement -- whether existing or anticipated -- to capture all emissions of carbon dioxide, an important greenhouse gas. But an MIT analysis suggests an intermediate step that could get construction moving again, allowing the nation to fend off growing electricity shortages using our most-abundant, least-expensive fuel while also reducing emissions.

Instead of capturing all of its CO2 emissions, plants could capture a significant fraction of those emissions with less costly changes in plant design and operation, the MIT analysis shows.

"Our approach -- 'partial capture' -- can get CO2 emissions from coal-burning plants down to emissions levels of natural gas power plants," said Ashleigh Hildebrand, a graduate student in chemical engineering and the Technology and Policy Program. "Policies such as California's Emissions Performance Standards could be met by coal plants using partial capture rather than having to rely solely on natural gas, which is increasingly imported and subject to high and volatile prices."

Hildebrand will present her findings on Nov. 18 at the 9th International Conference on Greenhouse Gas Control Technologies in Washington. Her co-author is Howard J. Herzog, principal research engineer at the MIT Energy Initiative and chair of the conference organizing committee.

The United States is facing a pressing need for more power plants that run essentially all the time. Renewable sources aren't suited to the task, nuclear plants can't be built quickly enough, and expanded reliance on natural gas raises price and energy-security concerns. Coal, which now supplies more than half of all U.S. electricity, seems the best option.

But as several states have started to regulate CO2 emissions, and others are expected to follow suit, some of the luster has come off coal. Amid the uncertainty, no one wants to be the "first mover" on building a new coal plant incorporating carbon capture and storage (CCS). Depending on the type of plant, carbon capture alone can increase the initial capital cost by 30 to 60 percent and decrease plant efficiency so that the cost per kilowatt-hour rises. That high cost would reduce a plant's economic competitiveness, meaning it might be called on to run on a limited basis, or not at all. Plus, CCS hasn't been proved at full scale, so no one knows exactly what to expect.

In Herzog's view, the call for full carbon capture is "a policy of inaction, a policy that won't move forward either new coal plants or the CCS technology." Partial capture could be a viable intermediate step.

The push for full capture (defined as 90 percent of the total) is in part economic: everyone assumed that 90 percent capture would -- due to economies of scale -- yield the lowest cost per ton of CO2 removed. Anything less than 90 percent would mean a higher per-ton cost.

To investigate that assumption, Hildebrand and Herzog modeled the technological changes and costs involved in capturing fractions ranging from zero to 90 percent. The model takes into account technological breakpoints. For example, carbon capture is achieved by a series of devices that absorb CO2, release it and compress it. Full capture may require two or more parallel series.

The model confirms that the cost per ton of CO2 removed declines as the number of captured tons increases. Not surprisingly, when the second series is added, cost per ton goes up, but it then quickly levels off. Cost per ton is thus roughly the same at, say, 60 percent capture as it is at 90 percent capture. Since there are no economies of scale to be gained by going to 90 percent, companies can remove less -- and significantly reduce their initial capital investment as well as the drop in efficiency once the plant is running.

The researchers conclude that as a near-term measure, partial capture looks promising. New coal plants with lower CO2 emissions would generate much-needed electricity while also demonstrating carbon capture and providing a setting for testing CO2 storage -- steps that will accelerate the large-scale deployment of full capture in the future.

This research was supported by the MIT Carbon Sequestration Initiative and the National Science Foundation.

TheÂ GHGT-9Â conference is organized by MIT in collaboration with the IEA Greenhouse Gas R&D Programme (IEA GHG), with sponsorship from the U.S. Department of Energy.