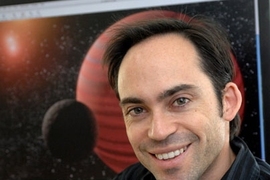 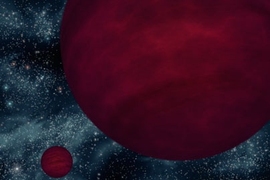 ↓ Download Image
Caption: This artist's concept shows the dimmest star-like bodies currently known -- twin brown dwarfs referred to as 2M 0939. The twins, which are about the same size, are drawn as if viewed from one side.
Credits: Image courtesy / NASA

Caption:
Professor Adam Burgasser, physics, has a paper on the discovery of the faintest brown dwarfs ever found.
Credits:
Photo / Donna Coveney

Caption:
This artist's concept shows the dimmest star-like bodies currently known -- twin brown dwarfs referred to as 2M 0939. The twins, which are about the same size, are drawn as if viewed from one side.
Credits:
Image courtesy / NASA

The two faintest star-like objects ever found, a pair of twin "brown dwarfs" each just a millionth as bright as the sun, have been spotted by a team led by MIT physicist Adam Burgasser.

"These brown dwarfs are the lowest power stellar light bulbs in the sky that we know of," said Burgasser. And these extra-dim brown dwarfs may be the first discoveries of the predominant type in space. "In this regime [of faintness] we expect to find the bulk of the brown dwarfs that have formed over the lifetime of the galaxy," he said. "So in that sense these objects are the first of these 'most common' brown dwarfs, which haven't been found yet because they are simply really faint."

Burgasser, an assistant professor of physics at MIT, said "both of these objects are the first to break the barrier of one millionth the total light-emitting power of the sun." He is lead author of a paper about the discovery appearing in the Astrophysical Journal Letters on Dec. 10.

Astronomers had thought the pair of dim bulbs was just a single typical, faint brown dwarf with no record-smashing titles. But when Burgasser and his team used NASA's Spitzer Space Telescope to observe the brown dwarf in infrared light, it was able to accurately measure the object's extreme faintness and low temperature for the first time. The Spitzer data revealed that what seemed to be a single brown dwarf is in fact twins.

Brown dwarfs are compact balls of gas floating freely in space, too cool and lightweight to be stars but too warm and massive to be planets. The name "brown dwarf" comes from the fact that these small star-like bodies change color over time as they cool, and thus have no definitive color. In reality, most brown dwarfs would appear reddish if they could be seen with the naked eye.

When Burgasser and his collaborators used Spitzer's ultrasensitive infrared vision to learn more about the object, thought to be a solo brown dwarf, the data revealed a warm atmospheric temperature of 565 to 635 Kelvin (560 to 680 degrees Fahrenheit). While this is hundreds of degrees hotter than Jupiter, it's still downright cold as far as stars go. In fact, the brown dwarfs, called 2MASS J09393548-2448279, or 2M 0939 for short, are among the coldest brown dwarfs measured so far.

To calculate the object's brightness, the researchers had to first determine its distance from Earth. After three years of precise measurements with the Anglo-Australian Observatory in Australia, they concluded that 2M 0939 is the fifth closest known brown dwarf to us, 17 light-years away toward the constellation Antlia. This distance together with Spitzer's measurements told the astronomers the object was both cool and extremely dim.

But something was puzzling. The brightness of the object was twice what would be expected for a brown dwarf with its particular temperature. The solution? The object must have twice the surface area. In other words, it's twins, with each body shining only half as bright, and each with a mass of 30 to 40 times that of Jupiter. Both bodies are one million times fainter than the sun in total light, and at least one billion times fainter in visible light alone.

Burgasser said studying these objects could help astronomers understand details of brown dwarf structure and evolution. These observations "allow us to see for the first time what the atmospheres of very old and/or very low mass brown dwarfs contain and how they are structured," he said.

The work was funded in part by a NASA grant.