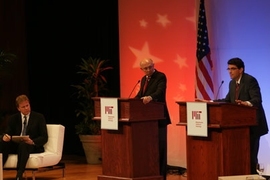 Although they agreed on some key points, the debaters delineated clear distinctions between the candidates' plans, most notably that McCain favors leaving most decisions on energy choices up to the states, while Obama calls for significant regulations and investment in research at the federal level.

The 90-minute debate, organized by the student-run MIT Energy Club and the MIT Energy Initiative, featured James Woolsey, former CIA director and an advisor on energy to Republican candidate McCain, and Jason Grumet, head of the National Commission on Energy Policy and an energy advisor to Democratic candidate Obama. Tom Ashbrook, host of the NPR program "On Point," was the moderator; questions were asked by two journalists and a panel of four MIT students.

The two campaign representatives made it clear at the outset that they have been longtime friends and have worked together on energy projects, setting an amicable and often jocular tone for the debate in which they clearly outlined their candidates' views.

Woolsey stressed that McCain favors an emphasis on local control over energy choices, rather than too much federal control over "picking and choosing" the winners and losers among the many proposed energy alternatives. He also stressed McCain's "willingness to take the lead in opening up offshore oil reserves."

Grumet said that Obama believes it is essential "to have comprehensive energy policies," and compared his candidate's very detailed proposals to what he called McCain's "two-and-a-half-page memo" on energy policy that is really just "an enumeration of slogans." And he chastised McCain for saying he would put vice-presidential candidate Sarah Palin in charge of energy policy, saying that by contrast Obama "will make this a personal priority."

Both debaters agreed on the importance of reducing the nation's dependence on imported oil, but emphasized differences on how to achieve that goal. In addition to increasing domestic production, Woolsey said, McCain favors strong development of alternative fuels, but without prescribing which fuels or production methods would get support, leaving the market to pick the best options. Grumet said Obama's plan emphasizes a strong federal policy of requiring improvements in the fuel efficiency of cars and trucks, something he said Obama has already pushed hard for, helping to pass the first increases in federal mileage standards in 30 years.

Moving toward technology for capturing and storing the carbon emissions from power plants is an approach that both candidates favor, the debaters said. Grumet called developing such technologies a crucial need, saying that if a cost-effective system could be developed that could be retrofitted on existing fossil-fuel power plants "that would be the most important breakthrough we could have." To achieve that, he said, Obama has committed to spending $15 billion a year for 10 years for research on such technologies.

Woolsey agreed on the importance of the technology, saying McCain supports an initial $2 billion a year commitment, which would grow over time using revenues from selling licenses under a proposed cap-and-trade system. The latter could generate "something in the ballpark of $10 to $20 billion a year," much of which could be used for such research.

The two also differed on plans for nuclear power. Woolsey said McCain supports a federal push to build 45 new nuclear plants over the next 20 years, because in terms of baseload power production that produces no operating carbon emissions, "it's about the only thing we've got going for us." Grumet responded by citing an MIT study of nuclear power's potential that found it was "not cost effective" without large federal subsidies, but added that Obama had voted for funding research that would "keep the door open" for new nuclear power, which McCain had opposed.

Both of the energy advisors agreed on the importance of making significant improvements in the nation's electric grid. Grumet said that "we have a dumb grid" that does not "bring power from the sunny and windy parts of the country" to where it's needed. He suggested the creation of a series of public-private demonstration projects to modernize the grid through a "coordinated strategy" for the nation. Woolsey agreed that "a smart grid is important," and that it's also essential to make the grid more secure to guard against the kind of failures that led to a widespread East-coast power blackout in 2003.

Grumet said that while the two candidates' energy plans are "theoretically quite similar," it's important to look at their voting records, which show that Sen. McCain "voted 20 times against renewable energy and efficiency standards." Woolsey responded that McCain has a "strong aversion to mandating specific choices" in energy systems, and instead "is in favor of generic encouragement of new technologies."

A version of this article appeared in MIT Tech Talk on October 8, 2008 (download PDF).