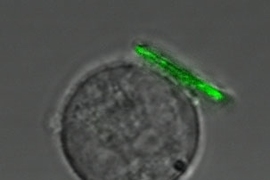 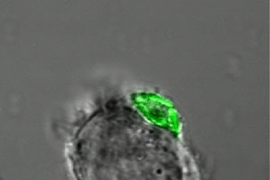 MIT engineers have outfitted cells with tiny "backpacks" that could allow them to deliver chemotherapy agents, diagnose tumors or become building blocks for tissue engineering.

Michael Rubner, director of MIT's Center for Materials Science and Engineering and senior author of a paper on the work that appeared online in Nano Letters on Nov. 5, said he believes this is the first time anyone has attached such a synthetic patch to a cell.

The polymer backpacks allow researchers to use cells to ferry tiny cargoes and manipulate their movements using magnetic fields. Since each patch covers only a small portion of the cell surface, it does not interfere with the cell's normal functions or prevent it from interacting with the external environment.

"The goal is to perturb the cell as little as possible," said Robert Cohen, the St. Laurent Professor of Chemical Engineering at MIT and an author of the paper.

The researchers worked with B and T cells, two types of immune cells that can home to various tissues in the body, including tumors, infection sites, and lymphoid tissues -- a trait that could be exploited to achieve targeted drug or vaccine delivery.

"The idea is that we use cells as vectors to carry materials to tumors, infection sites or other tissue sites," said Darrell Irvine, an author of the paper and associate professor of materials science and engineering and biological engineering.

Another possible application is in tissue engineering. Patches could be designed that allow researchers to align cells in a certain pattern, eliminating the need for a tissue scaffold.

The polymer patch system consists of three layers, each with a different function, stacked onto a surface. The bottom layer tethers the polymer to the surface, the middle layer contains the payload, and the top layer serves as a "hook" that catches and binds cells.

Once the layers are set up, cells enter the system and flow across the surface, getting stuck on the polymer hooks. The patch is then detached from the surface by simply lowering the temperature, and the cells float away, with backpacks attached.

"The rest of the cell is untouched and able to interact with the environment," said Albert Swiston, lead author of the paper and a graduate student in materials science and engineering.

The researchers found that T cells with backpacks were able to perform their normal functions, including migrating across a surface, just as they would without anything attached.

By loading the backpacks with magnetic nanoparticles, the researchers can control the cells' movement with a magnetic field.

Because the polymer synthesis and assembly takes place before the patches are attached to cells, there is plenty of opportunity to tweak the process to improve the polymers' effectiveness and ensure they won't be toxic to cells, the researchers say.

Other authors of the paper are Soong Ho Um, a postdoctoral associate in the Departments of Materials Science and Engineering and Biological Engineering, and Connie Cheng, a recent Harvard graduate.

The research was funded by the National Science Foundation Materials Research Science and Engineering Center and an NSF Graduate Research Fellowship.