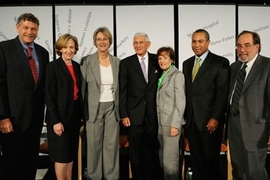 Declaring the success of an unprecedented experiment in science and philanthropy, Los Angeles-based philanthropists Eli and Edythe Broad announced today that they have increased their total gift to the Broad Institute of Harvard and MIT to $600 million. Adding to their previous gifts totaling $200 million, the Broads today gave an endowment of $400 million to convert the Institute, which had been launched as a 10-year "venture" experiment, into a permanent biomedical research organization aimed at transforming medicine.

This unprecedented gift is remarkable in several ways. The $600 million commitment is the largest to support biomedical research activity at universities anywhere in the world. Beyond its magnitude, however, the gift reflects a new model for venture philanthropy, for collaboration among universities, and for doing biomedical science.

The Broad Institute was launched in 2004 in the wake of the Human Genome Project (HGP) with the mission of fulfilling the promise of genomics for medicine and the goal of sustaining the collaborative spirit that propelled the HGP. The Institute aimed to bring together scientists to tackle major interdisciplinary problems related to cancer, metabolic diseases, infectious diseases, psychiatric diseases, and other conditions.

Rather than being established at a single university, the Broad Institute was launched as a new kind of research organization spanning the entire MIT and Harvard communities, including the 17 Harvard-affiliated teaching hospitals. As a result, scientists from the various institutions and from diverse disciplines, including biology, medicine, chemistry, and computer science, created collaborative teams to tackle problems beyond what any of them could do alone. The Broad Institute was also committed to scientific openness, including rapid and free sharing of data and research tools. Today, more than 1200 scientists and professional staff from across Harvard and MIT are affiliated with the Institute.

Rather than initially endow the new organization, Eli and Edythe Broad decided to take a "venture" approach in 2004. They made a commitment of $100 million to be spent over 10 years -- investing in an "experiment" to test whether the new model would dramatically accelerate scientific progress. In late 2005, they doubled their gift to $200 million over 10 years in recognition of the Broad Institute's early progress. Acknowledgement of the power of this model of science has also come from the Stanley Medical Research Institute, which gave $100 million in 2007 to create the Stanley Center for Psychiatric Research at the Broad Institute. The Starr Foundation, the Prostate Cancer Foundation, and the Juvenile Diabetes Research Foundation, among others, have also provided significant funds to support the Institute's collaborative work and groundbreaking advances in a variety of human diseases.

Now, after just four years, Harvard, MIT, and the Broads have declared the experiment a rousing success in science and philanthropy that should be sustained as a permanent institution. As a result of the Broads' endowment, the Broad Institute will transition to a permanent non-profit organization, with both universities continuing to help govern it. The mission and collaborative research by scientists from across Harvard and MIT will continue to be at the heart of the Broad Institute.

"Of all of our philanthropy, the Broad Institute has been the investment that has yielded the greatest returns," said Eli Broad, founder of The Eli and Edythe Broad Foundation. "This truly is a new way of doing science, and the Institute's unique collaborative model for scientific research has resulted in remarkable accomplishments in a very short period of time. Although this is a large gift -- the largest we have ever made -- it is only a fraction of what will be needed to unlock the enormous promise of biomedical research at MIT and Harvard. We hope to see this endowment grow to $1 billion through investment and additional gifts, and we are counting on others to step forward as partners in the next phase of this grand experiment. We are convinced that the genomics and biomedical work being conducted here at the world's leading genomics center by the world's best and brightest scientists will ultimately lead to the cure and even the prevention of diseases."

"Eli and Edythe Broad are true visionaries," said Eric Lander, founding director of the Broad Institute. "They made an enormous bet in 2004. Their bet has paid off more handsomely than any of us imagined. It has unleashed the creative potential of a remarkable community of scientists. And, it has defined a new model for how scientists and institutions can work together."

"There is no place in the world with as great a concentration of life sciences talent, resources and vision as Massachusetts," said Deval Patrick (D), Governor of the Commonwealth of Massachusetts. "With this significant endowment of the Broad Institute by Eli and Edythe Broad -- and the collaboration and support of the industry, academia, business and government through the Massachusetts Life Sciences Initiative -- we are on our way to helping find new cures for diseases, creating new jobs, and positioning ourselves for long-term economic growth."

In the Broad Institute's short history, its researchers have already made major contributions to biomedicine. The progress made in the past four years includes:

"To fully realize the benefits of the genomic sciences, scientific research must transcend the boundaries of disciplines, departments, and even institutions," said Harvard University President Drew Gilpin Faust. "Through their continued philanthropy, the Broads have made that transcendence possible. I am grateful for their support of this important work and look forward to continuing our partnership with the Broad Institute."

"Cambridge and Boston are world-renowned for their creative, scientific minds and unrivaled biomedical community, and the Broad Institute is uniquely positioned to realize the full potential of these intellectual resources," said Susan Hockfield, president of MIT. "We are profoundly grateful to Eli and Edythe Broad for their generosity and vision and look forward to continuing our many collaborative research efforts through the Broad Institute and defining the future of the field."