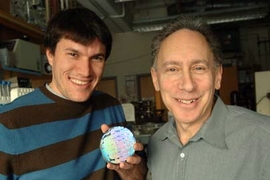 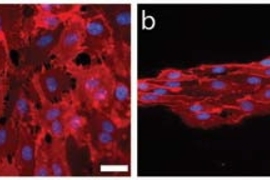 ↓ Download Image
Caption: When endothelial progenitor cells are grown on a nanopatterned substrate, they align in the direction of the pattern (right). At left are cells grown on a flat surface.
Credits: Images / Christopher Bettinger 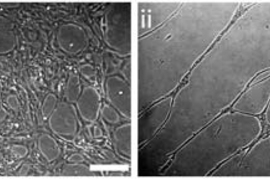 Caption:
When endothelial progenitor cells are grown on a nanopatterned substrate, they align in the direction of the pattern (right). At left are cells grown on a flat surface.
Credits:
Images / Christopher Bettinger

MIT scientists have found a way to induce cells to form parallel tube-like structures that could one day serve as tiny engineered blood vessels.

The researchers found that they can control the cells' development by growing them on a surface with nano-scale patterning. A paper on the work was posted this month in an online issue of Advanced Materials.

Engineered blood vessels could one day be transplanted into tissues such as the kidneys, liver, heart or any other organs that require large amounts of vascular tissue, which moves nutrients, gases and waste to and from cells.

"We are very excited about this work," said Robert Langer, MIT Institute Professor and an author of the paper. "It provides a new way to create nano-based systems with what we hope will provide a novel way to someday engineer tissues in the human body."

The work focuses on vascular tissue, which includes capillaries, the tiniest blood vessels, and is an important part of the circulatory system. The team has created a surface that can serve as a template to grow capillary tubes aligned in a specific direction.

The researchers built their template using microfabrication machinery at Draper Laboratory in Cambridge. Normally such technology is used to build micro-scale devices, but the researchers adapted it to create nano-scale patterns on a silicone elastomer substrate. The surface is patterned with ridges and grooves that guide the cells' growth.

"The cells can sense (the patterns), and they end up elongated in the direction of those grooves," said Christopher Bettinger, MIT graduate student in materials science and engineering and lead author of the paper.

The cells, known as endothelial progenitor cells (EPCs), not only elongate in the direction of the grooves, but also align themselves along the grooves. That results in a multicellular structure with defined edges, also called a band structure.

Once the band structures form, the researchers apply a commonly used gel that induces cells to form three-dimensional tubes. Unlike cells grown on a flat surface, which form a network of capillary tubes extending in random directions, cells grown on the nano-patterned surface form capillaries aligned in the direction chosen by the researchers.

The researchers believe the technique works best with EPCs because they are relatively immature cells. Earlier attempts with other types of cells, including mature epithelial cells, did not produce band structures.

Growing tissue on a patterned surface allows researchers a much greater degree of control over the results than the classic tissue engineering technique of mixing cell types with different growth factors and hoping that a useful type of tissue is produced, said Bettinger.

"With this technique, we can take the guesswork out of it," he said.

The next step is to implant capillary tubes grown in the lab into tissues of living animals and try to integrate them into the tissues.

Other authors of the paper are Jeffrey Borenstein, director of the Biomedical Engineering Center at Draper Laboratory; Zhitong Zhang, an MIT senior in the Department of Chemical Engineering; and Sharon Gerecht of Johns Hopkins University.

The research was funded by the National Institutes of Health, Draper Laboratory and the Juvenile Diabetes Research Foundation.