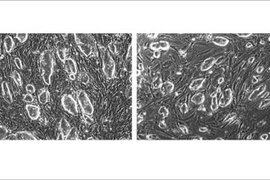 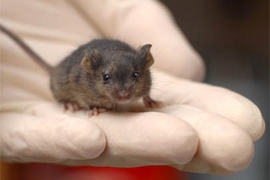 ↓ Download Image
Caption: This chimeric mouse is comprised, in part, of reprogrammed fibroblasts that have contributed to all tissue and cell types.
Credits: Photo / Sam Ogden

Caption:
This chimeric mouse is comprised, in part, of reprogrammed fibroblasts that have contributed to all tissue and cell types.
Credits:
Photo / Sam Ogden

Scientists have created embryonic stem cells in mice without destroying embryos in the process, potentially removing the major controversy over work in this field. Embryonic stem cells are special because they are pluripotent, meaning they can develop into virtually any kind of tissue type. They therefore offer the promise of customized cells for therapy.

The work, which appears in the June 6 online issue of Nature, was led by Rudolf Jaenisch, a member of the Whitehead Institute and a professor of biology at MIT. His colleagues on the work are from Whitehead, MIT, Massachusetts General Hospital, the Broad Institute of MIT and Harvard, and Harvard Medical School.

Somatic cell nuclear transfer ("therapeutic cloning") offers the hope of one day creating customized embryonic stem cells with a patient's own DNA. In this process, an individual's DNA would be placed into an egg, resulting in a blastocyst that houses a supply of stem cells. But to access these cells, researchers must destroy a viable embryo.

Now, Jaenisch and colleagues have demonstrated that embryonic stem cells can be created without eggs. By genetically manipulating mature skin cells taken from a mouse, the scientists transformed these cells back into a state identical to that of an embryonic stem cell. No eggs were used, and no embryos destroyed.

"These reprogrammed cells, by all criteria that we can apply, are indistinguishable from embryonic stem cells," says Jaenisch.

What's more, these reprogrammed skin cells can give rise to live mice, contributing to every kind of tissue type, and can even be transmitted via germ cells (sperm or eggs) to succeeding generations. "Germline transmission is the final and definitive proof that these cells can do anything a traditionally derived embryonic stem cell can do," adds Jaenisch.

"But," he cautions, "these results are preliminary and proof of principle. It will be a while before we know if this can ever be done in humans. Human embryonic stem cells remain the gold standard for pluripotent cells and it is a necessity to continue studying embryonic stem cells through traditional means."

In August 2006, researchers at Kyoto University reported that by activating four genes in a mouse skin cell, they could reprogram that cell into a pluripotent state resembling an embryonic stem cell. However, the resulting cells were limited when compared with real embryonic stem cells, and the Kyoto team was unable to generate live mice from these cells.

How they did it

Using artificial viruses called vectors, the team activated the same four genes in a batch of mouse skin cells. These genes, Oct4, Sox2, c-Myc and Klf4, are called transcription factors, meaning that they regulate large networks of other genes. While Oct4 and Sox2 are normally active in the early stages of embryogenesis, they typically shut down once an embryo has developed beyond the blastocyst stage.

"We were working with tens of thousands of cells, and we needed to devise a precise method for picking out those rare cells in which the reprogramming actually worked," says Wernig. "On average, it only works in about one out of 1,000 cells."

To test for reprogramming, the team decided to zero in on Oct4 and another transcription factor called Nanog. These two hallmarks for embryonic stem cell identity are only active in fully pluripotent cells. The trick would be to figure out a way to harvest Oct4- and Nanog-active cells from the rest of the population.

The answer came in the form of a laboratory technique called homologous recombination. Here, the scientists took genetic material known to be resistant to the toxic drug neomycin and spliced it into the genomes of each cell right beside Oct4 and Nanog. If Oct4 and Nanog switched on, the drug-resistant DNA would also spring into action. The researchers then added neomycin to the cells. Only those fully reprogrammed cells with active Oct4 and Nanog survived.

Next, the team ran these cells through a battery of tests, seeing if they could discover any substantial differences between these cells and normal embryonic stem cells.

"In all tests...there were no molecular markers distinguishing these two groups," says Meissner.

But definitive proof would only come through demonstrating that these cells could actually develop into any kind of body tissue and cell type. The researchers approached this question in three ways.

Next, they bred these mice and found lineages of the reprogrammed cells in the subsequent generation, proving that these new cells had contributed to the germ line.

Finally, the team took advantage of another lab technique that involves creating a genetically abnormal embryo whose cells all consist of four chromosomes, rather than two. Because of this aberrant formation, the embryo can only form a placenta and cannot develop into a full-term fetus. The researchers injected the reprogrammed cells into this embryo and then implanted it in a uterus. Eventually live late-gestation fetuses could be recovered--created exclusively from the reprogrammed cells.

"This is the most stringent criteria anyone can use to determine if a cell is pluripotent," says Jaenisch.

Still, many technical hurdles remain for possibly translating this work to human cells. For example, the homologous recombination technique used to isolate the pluripotent cells does not yet work in human embryonic stem cells.

"We are optimistic that this can one day work in human cells," says Wernig. "We just need to find new strategies to reach that goal. For now, it would simply be premature and irresponsible to claim that we no longer need oocytes for embryonic stem cell research."

A version of this article appeared in MIT Tech Talk on June 13, 2007 (download PDF).