Scientists at MIT unraveling the secrets of red tide 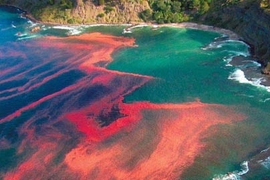 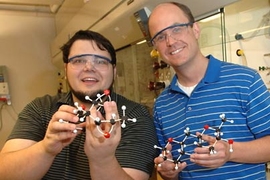 ↓ Download Image
Caption: MIT Professor Tim Jamison, right, and co-author Ivan Vilotijevic, a grad student in chemistry, have discovered how the organisms behind red tide may produce the algal bloom's toxic effects. They hold models of molecules that, in water,Â transform into representative portions of the red tide toxins.
Credits: Photo / Donna Coveney

Caption:
MIT Professor Tim Jamison, right, and co-author Ivan Vilotijevic, a grad student in chemistry, have discovered how the organisms behind red tide may produce the algal bloom's toxic effects. They hold models of molecules that, in water,Â transform into representative portions of the red tide toxins.
Credits:
Photo / Donna Coveney

In work that could one day help prevent millions of dollars in economic losses for seaside communities, MIT chemists have demonstrated how tiny marine organisms likely produce the red tide toxin that periodically shuts down U.S. beaches and shellfish beds.

In the Aug. 31 cover story of Science, the MIT team describes an elegant method for synthesizing the lethal components of red tides. The researchers believe their method approximates the synthesis used by algae, a reaction that chemists have tried for decades to replicate, without success.

Understanding how and why red tides occur could help scientists figure out how to prevent the blooms, which cause significant ecological and economic damage. The New England shellfish industry, for example, lost tens of millions of dollars during a 2005 outbreak, and red tide killed 30 endangered manatees off the coast of Florida this spring.

The discovery by MIT Associate Professor Timothy Jamison and graduate student Ivan Vilotijevic not only could shed light on how algae known as dinoflagellates generate red tides, but could also help speed up efforts to develop cystic fibrosis drugs from a compound closely related to the toxin.

Red tides, also known as algal blooms, strike unpredictably and poison shellfish, making them dangerous for humans to eat. It is unknown what causes dinoflagellates to produce the red tide toxins, but it may be a defense mechanism, possibly provoked by changes in the tides, temperature shifts or other environmental stresses.

One of the primary toxic components of red tide is brevetoxin, a large and complex molecule that is very difficult to synthesize.

Twenty-two years ago, chemist Koji Nakanishi of Columbia University proposed a cascade, or series of chemical steps, that dinoflagellates could use to produce brevetoxin and other red tide toxins. However, chemists have been unable to demonstrate such a cascade in the laboratory, and many came to believe that the "Nakanishi Hypothesis" would never be proven.

"A lot of people thought that this type of cascade may be impossible," said Jamison. "Because Nakanishi's hypothesis accounts for so much of the complexity in these toxins, it makes a lot of sense, but there hasn't really been any evidence for it since it was first proposed."

Jamison and Vilotijevic's work offers the first evidence that Nakanishi's hypothesis is feasible.

Their work could also help accelerate drug discovery efforts. Brevenal, another dinoflagellate product related to the red tide toxins, has shown potential as a powerful treatment for cystic fibrosis (CF). It can also protect against the effects of the toxins.

"Now that we can make these complex molecules quickly, we can hopefully facilitate the search for even better protective agents and even more effective CF therapies," said Jamison.

"The trick is to give it a little push in the right direction and get it running smoothly," said Jamison.

The researchers speculate that in dinoflagellates, the initial jump start is provided by an enzyme instead of a template.

Conducting the reaction in water is also key to a successful synthesis. Water is normally considered a poor solvent for organic reactions, so most laboratory reactions are performed in organic solvents. However, when Vilotijevic introduced water into the reaction, he noticed that it proceeded much more quickly and selectively.

Although it could be a coincidence that these cascades work best in water and that dinoflagellates are marine organisms, water may nevertheless be directly involved in the biosynthesis of the toxins or emulating an important part of it, said Jamison. Because of this result, the researchers now believe that organic chemists should routinely try certain reactions in water as well as organic solvents.

The research was funded by the National Institute of General Medical Sciences, Merck Research Laboratories, Boehringer Ingelheim, and MIT.

"This is an elegant piece of work with multiple levels of impact," said John Schwab, who manages organic chemistry research for the National Institute of General Medical Sciences. "Not only will it allow chemists to synthesize this important class of complex molecules much more easily, but it also provides key insights into how nature may make these same molecules. This is terrific bang for the taxpayers' buck!"

A version of this article appeared in MIT Tech Talk on September 12, 2007 (download PDF).