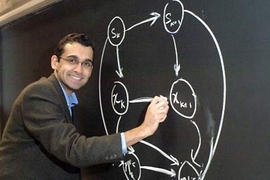 ↓ Download Image
Caption: Lakshminarayan Srinivasan (S.M., Ph.D. 2006) is part of a team that develops standardizing math equations to allow neural prostheses to work better. He is currently a medical student in the Harvard-MIT Division of Health Sciences and Technology and a postdoctoral researcher at the Center for Nervous System Repair at Massachusetts General Hospital.
Credits: Photo / Donna Coveney

Caption:
Lakshminarayan Srinivasan (S.M., Ph.D. 2006) is part of a team that develops standardizing math equations to allow neural prostheses to work better. He is currently a medical student in the Harvard-MIT Division of Health Sciences and Technology and a postdoctoral researcher at the Center for Nervous System Repair at Massachusetts General Hospital.
Credits:
Photo / Donna Coveney

MIT researchers have developed a new algorithm to help create prosthetic devices that convert brain signals into action in patients who have been paralyzed or had limbs amputated.

The technique, described in a paper published as the cover article in the October edition of the Journal of Neurophysiology, unifies seemingly disparate approaches taken by experimental groups that prototype these neural prosthetic devices in animals or humans.

"The work represents an important advance in our understanding of how to construct algorithms in neural prosthetic devices for people who cannot move to act or speak," said Lakshminarayan "Ram" Srinivasan (S.M., Ph.D. 2006), lead author of the paper.

Srinivasan, currently a postdoctoral researcher at the Center for Nervous System Repair at Massachusetts General Hospital and a medical student in the Harvard-MIT Division of Health Sciences and Technology (HST), began working on the algorithm while a graduate student in MIT's Department of Electrical Engineering and Computer Science (EECS).

Trauma and disease can lead to paralysis or amputation, reducing the ability to move or talk despite the capacity to think and form intentions. In spinal cord injuries, strokes, and diseases such as amyotrophic lateral sclerosis (Lou Gehrig's disease), the neurons that carry commands from the brain to muscle can be injured. In amputation, both nerves and muscle are lost.

Neural prosthetic devices represent an engineer's approach to treating paralysis and amputation. Here, electronics are used to monitor the neural signals that reflect an individual's intentions for the prosthesis or computer they are trying to use. Algorithms form the link between neural signals that are recorded and the user's intentions that are decoded to drive the prosthetic device.

Over the past decade, efforts at prototyping these devices have divided along various boundaries related to brain regions, recording modalities, and applications. The MIT technique provides a common framework that underlies all these various efforts.

The research uses a method called graphical models that has been widely applied to problems in computer science like speech-to-text or automated video analysis. The graphical models used by the MIT team are diagrams composed of circles and arrows that represent how neural activity results from a person's intentions for the prosthetic device they are using.

The diagrams represent the mathematical relationship between the person's intentions and the neural manifestation of that intention, whether the intention is measured by an electoencephalography (EEG), intracranial electrode arrays or optical imaging. These signals could come from a number of brain regions, including cortical or subcortical structures.

Until now, researchers working on brain prosthetics have used different algorithms depending on what method they were using to measure brain activity. The new model is applicable no matter what measurement technique is used, according to Srinivasan. "We don't need to reinvent a new paradigm for each modality or brain region," he said.

Srinivasan is quick to underscore that many challenges remain in designing neural prosthetic algorithms before they are available for people to use. While the algorithm is unifying, it is not universal: the algorithm consolidates multiple avenues of development in prostheses, but it isn't the final and only approach these researchers expect to see in the years to come. Moreover, energy efficiency and robustness are key considerations for any portable, implantible bio-electronic device.

Through a better quantitative understanding of how the brain normally controls movement and the mechanisms of disease, he hopes these devices could one day allow for a level of dexterity depicted in movies, such as actor Will Smith's mechanical arm in the movie, "I, Robot."

The gap between existing prototypes and that final goal is wide. Translating an algorithm into a fully functioning clinical device will require a great deal of work, but also represents an intriguing road of scientific and engineering development for the years to come.

Other authors on the paper are Uri Eden (Ph.D. 2005), assistant professor in mathematics and statistics at Boston University; Sanjoy Mitter, professor in EECS and MIT's Engineering Systems Division; and Emery Brown, professor in brain and cognitive sciences, HST, and anesthesia and critical care at Massachusetts General Hospital. The cover image for the October issue of Journal of Neurophysiology that depicts this research was designed by Rene Chen (B.S. 2007) and Eric Pesanelli.

A version of this article appeared in MIT Tech Talk on October 3, 2007 (download PDF).