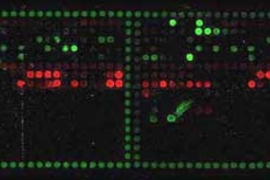 Researchers have known for decades that certain neurodegenerative diseases, such as mad cow disease or its human equivalent, Creutzfeldt-Jakob disease, result from a kind of infectious protein called a prion. Remarkably, in recent years researchers have discovered not only non-pathogenic prions that play beneficial roles in biology, but they have also found that prions may even act as essential elements in learning and memory.

Although prions have received a great deal of scrutiny, scientists still don't understand many of the most fundamental mechanisms of how prions form, replicate and cross from one species to another.

Now, through studying nontoxic yeast prions, scientists at MIT and the Whitehead Institute have discovered small but critical regions within prions that determine much of their behavior.

"These findings provide a new framework for us to begin exploring properties of prion biology that, up until now, have proven difficult to investigate," says Whitehead member and MIT biology professor Susan Lindquist, senior author of a paper that appeared in the May 9 online issue of Nature.

Proteins are the cell's workhorses, and they need to fold into complex and precise shapes to do their jobs. Prions are proteins that start out normally, but then at some point misfold--rather like an origami swan that comes out looking and acting instead like a vulture.

But prions have another characteristic that enables them to wreak havoc. They recruit other, properly folded proteins into misforming along with them, a process Lindquist calls a "conformational cascade." In many organisms, this conformational cascade creates long fibers called amyloids. (The brains of animals that have died from prion infections are literally packed with amyloid clumps.)

To glean insights into the mechanics that enable amyloid formation, Peter Tessier, a postdoctoral scientist in Lindquist's lab, used peptide arrays--glass slides covered with thousands of tiny protein fragments. Traditionally, these arrays are used for finding binding sites within well-behaved proteins. Here, Tessier designed the arrays so that he could observe protein folding and amyloid formation in real time.

Tessier covered the array with peptides from baker's yeast and then added prion protein to the array, also from the same yeast species. He found that a small cluster of peptides recruited the prion proteins to misfold into an amyloid structure. This region of the protein, which Tessier called a "recognition element," constitutes about 10 percent of the prion. Tessier repeated this experiment with peptides and a prion taken from pathogenic fungi. The results were the same.

Both prions also maintained a rigid species barrier. The baker's yeast prion could not recruit peptides from the pathogenic fungi cells, and vice versa.

While this prion is a laboratory construct not found in nature, these findings provide researchers with a new way to approach old questions, such as why some prion diseases can jump from one species to another but others can't. Tessier and Lindquist say it is likely that natural prions contain more than one recognition element, and recognition elements can slide into a neighboring region. Many external factors can determine which recognition element is activated, in turn influencing the downstream behavior of the prion.

"These findings are remarkable for two reasons," says Lindquist, who is also an investigator for Howard Hughes Medical Institute. "For one thing, this is the first time that these peptide arrays have been used to study protein folding. We've taken this platform to a whole new level. Also, we've seen just one small part of this prion inducing proteins to fold. This is an entirely new concept."

This research was supported by an American Cancer Society Postdoctoral Fellowship and grants from the DuPont-MIT Alliance and the National Institutes of Health.