Human-generated ozone will damage crops, according to MIT study 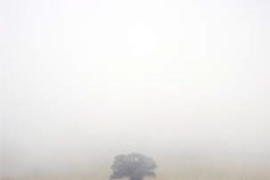 ↓ Download Image
Caption: MIT research has shown that increases in ozone will have a detrimental effect on crops, pastures and forests, severely affecting the world's economy. 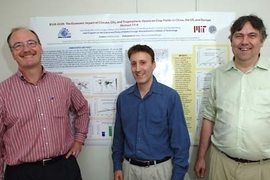 Caption:
MIT research has shown that increases in ozone will have a detrimental effect on crops, pastures and forests, severely affecting the world's economy.

A novel MIT study concludes that increasing levels of ozone due to the growing use of fossil fuels will damage global vegetation, resulting in serious costs to the world's economy.

The analysis, reported in the November issue of Energy Policy, focused on how three environmental changes (increases in temperature, carbon dioxide and ozone) associated with human activity will affect crops, pastures and forests.

The research shows that increases in temperature and in carbon dioxide may actually benefit vegetation, especially in northern temperate regions. However, those benefits may be more than offset by the detrimental effects of increases in ozone, notably on crops. Ozone is a form of oxygen that is an atmospheric pollutant at ground level.

The economic cost of the damage will be moderated by changes in land use and by agricultural trade, with some regions more able to adapt than others. But the overall economic consequences will be considerable. According to the analysis, if nothing is done, by 2100 the global value of crop production will fall by 10 to 12 percent.

"Even assuming that best-practice technology for controlling ozone is adopted worldwide, we see rapidly rising ozone concentrations in the coming decades," said John M. Reilly, associate director of the MIT Joint Program on the Science and Policy of Global Change. "That result is both surprising and worrisome."

While others have looked at how changes in climate and in carbon dioxide concentrations may affect vegetation, Reilly and colleagues added to that mix changes in tropospheric ozone. Moreover, they looked at the combined impact of all three environmental "stressors" at once. (Changes in ecosystems and human health and other impacts of potential concern are outside the scope of this study.)

Results for the impacts of climate change and rising carbon dioxide concentrations (assuming business as usual, with no emissions restrictions) brought few surprises. For example, the estimated carbon dioxide and temperature increases would benefit vegetation in much of the world.

The effects of ozone are decidedly different.

Without emissions restrictions, growing fuel combustion worldwide will push global average ozone up 50 percent by 2100. That increase will have a disproportionately large impact on vegetation because ozone concentrations in many locations will rise above the critical level where adverse effects are observed in plants and ecosystems.

Crops are hardest hit. Model predictions show that ozone levels tend to be highest in regions where crops are grown. In addition, crops are particularly sensitive to ozone, in part because they are fertilized. "When crops are fertilized, their stomata open up, and they suck in more air. And the more air they suck in, the more ozone damage occurs," said Reilly. "It's a little like going out and exercising really hard on a high-ozone day."

What is the net effect of the three environmental changes? Without emissions restrictions, yields from forests and pastures decline slightly or even increase because of the climate and carbon dioxide effects. But crop yields fall by nearly 40 percent worldwide.

However, those yield losses do not translate directly into economic losses. According to the economic model, the world adapts by allocating more land to crops. That adaptation, however, comes at a cost. The use of additional resources brings a global economic loss of 10-12 percent of the total value of crop production.

Global estimates do not tell the whole story, however, as regional impacts vary significantly.

For example, northern temperate regions generally benefit from climate change because higher temperatures extend their growing season. However, the crop losses associated with high ozone concentrations will be significant. In contrast, the tropics, already warm, do not benefit from further warming, but they are not as hard hit by ozone damage because ozone-precursor emissions are lower in the tropics.

The net result: regions such as the United States, China and Europe would need to import food, and supplying those imports would be a benefit to tropical countries.

Reilly warns that the study's climate projections may be overly optimistic. The researchers are now incorporating a more realistic climate simulation into their analysis.

Reilly's colleagues are from MIT and the Marine Biological Laboratory. The research was supported by the Department of Energy, the Environmental Protection Agency, the National Science Foundation, NASA, the National Oceanographic and Atmospheric Administration and the MIT Joint Program on the Science and Policy of Global Change.

It is part of the MIT Energy Initiative (MITEI), an Institute-wide initiative designed to help transform the global energy system to meet the challenges of the future. MITEI includes research, education, campus energy management and outreach activities, an interdisciplinary approach that covers all areas of energy supply and demand, security and environmental impact.