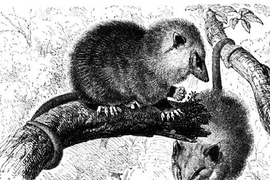 ↓ Download Image
Caption: Scientists at the Broad Institute, in completing the genome sequence of the opossum, have found that so-called junk DNA may play a creative role in evolution.
Credits: Source / Gustav MÃ¼tzel illustration, from Brehms Tierleben

Caption:
Scientists at the Broad Institute, in completing the genome sequence of the opossum, have found that so-called junk DNA may play a creative role in evolution.
Credits:
Source / Gustav MÃ¼tzel illustration, from Brehms Tierleben

The human genome is littered with so-called junk DNA, relics of "jumping genes" that hopped about chromosomes for more than a billion years. Although these jumping genes have been widely regarded as parasites, concerned only with self-propagation, a new study suggests they in fact played a creative role in evolution--spreading key genetic innovations across the genome.

This insight emerges from the work of an international research team led by scientists at the Broad Institute of MIT and Harvard, which has completed a high-quality genome sequence of the opossum, Monodelphis domestica, the first marsupial to have its DNA decoded.

The work, which appears in the May 10 issue of Nature, provides a fresh look at the evolutionary origins of the human genome. It also sheds light on the genetic differences between placental mammals (including humans, mice and dogs) and marsupial mammals, such as opossums and kangaroos.

"Marsupials are the closest living relatives of placental mammals," said senior author Kerstin Lindblad-Toh, codirector of the Broad Institute's genome sequencing and analysis program. "Because of this relationship, the opossum genome offers a unique lens through which to view the evolution of our own genome."

In the last few years, the functionally important elements of the human genome have been identified through genomic comparisons with other placental mammals. These genetic "working parts" are shared universally across all placental mammals and therefore must have been present when the creatures arose, about 100 million years ago.

But how did these critical features evolve in the first place?

The scientists knew important clues could be found if they could search the recent past, rather than far-off times in evolutionary history. For this, marsupials held the key.

Marsupials are closely related to placental mammals, but the two groups diverged 180 million years ago--well before placental mammals appeared. So, by comparing the opossum and human genomes, the scientists were able to pinpoint the genetic elements that are present in placental mammals but missing from marsupials--that is, the ones that appeared just before the divergence of placental mammals.

Interestingly, about one-fifth of the key functional elements in the human genome arose during this recent evolutionary period. By focusing on these "newer" innovations, the scientists made two remarkable findings:

"Biology depends upon the precise coordination of large sets of genes that are switched on and off together," said Eric Lander, director of the Broad Institute, an MIT professor of biology and an author of the Nature paper. "One of the great mysteries in evolution is how this synchrony arises. These findings suggest a simple answer: genetic controls can evolve in one location in the genome and then be distributed elsewhere by transposons."

This work was funded by the National Human Genome Research Institute.