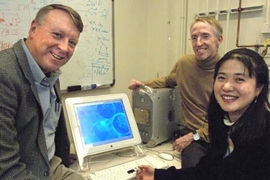 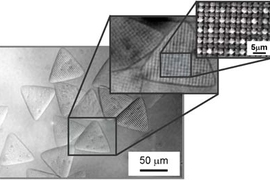 MIT engineers have used ultraviolet light to sculpt three-dimensional microparticles that could have many applications in medical diagnostics and tissue engineering. For example, the particles could be designed to act as probes to detect certain molecules, such as DNA, or to release drugs or nutrients.

The new technique offers unprecedented control over the size, shape and texture of the particles. It also allows researchers to design particles with specific chemical properties, such as porosity (a measure of the void space in a material that can affect how fast different molecules can diffuse through the particles).

"With this method, you can rationally design particles, and precisely place chemical properties," said Patrick Doyle, associate professor of chemical engineering. Doyle is one of the authors of a paper on the work appeared in the Dec. 3 issue of the journal Angewandte Chemie, published by the German Chemical Society.

The research team started with a method that Doyle and his students reported in a 2006 issue of Nature Materials to create two-dimensional particles. Called continuous flow lithography, this approach allows shapes to be imprinted onto flowing streams of liquid polymers. Wherever pulses of ultraviolet light strike the flowing stream of small monomeric building blocks, a reaction is set off that forms a solid polymeric particle. They have now modified that method to add three-dimensionality.

This process can create particles very rapidly: Speeds range from 1,000 to 10,000 particles per second, depending on the size and shape of the particles. The particles range in size from about a millionth of a meter to a millimeter.

The team's new process works by shining ultraviolet light through two transparency masks, which define and focus the light before it reaches the flowing monomers. The first mask, which controls the size and shape of the particles, is part of the technique reported last year by Doyle and his students. The second mask, which is based on MIT professor Edwin Thomas' work in multibeam lithography, adds three-dimensional texture and other physical traits, such as porosity.

The collaboration sprung from a conversation between Ji-Hyun Jang, a postdoctoral associate in Thomas' lab, and Dhananjay Dendukuri, a recent Ph.D. recipient in Doyle's lab, who are also authors on the paper.

"It's very easy to integrate the (second) phase mask into the microfluidic apparatus," said Thomas, Morris Cohen Professor of Materials Science and Engineering and head of the Department of Materials Science and Engineering. "Professor Doyle was controlling the overall shape, and now what we're doing is controlling these inner labyrinth networks."

Adding inner texture is desirable because it increases the particles' surface-to-volume ratio, which means if the particle is loaded with probes, there are more potential binding sites for target molecules.

In a paper published in Science earlier this year, Doyle and MIT graduate student Daniel Pregibon showed that the particles can be used as probes to identify DNA and other molecules.

Other applications for the particles include tissue engineering. For example, they could form a scaffold that would both provide structural support for growing cells and release growth factors and other nutrients. The particles can be designed so diffusion occurs in a particular direction, allowing researchers to control the direction of nutrient flow.

Alan Hatton, the Ralph Landau Professor of Chemical Engineering Practice, is also an author on the paper.

This research was funded by the U.S. Army Research Office through the MIT Institute for Soldier Nanotechnologies.