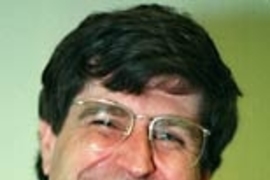 Professor Klavs Jensen has been named head of the Department of Chemical Engineering, effective Feb. 1.

Jensen, the Lammot DuPont Professor of Chemical Engineering, "is a noted chemical engineering researcher and educator," said Thomas Magnanti, dean of engineering, in announcing the appointment.

"As many of you might know, he has made important contributions to a wide variety of arenas, including microfabrication, testing and integration of microfluidics in the context of chemical and biological discovery, synthesis and processing ... He is well known, for example, for his pioneering research on 'chemical processes on a chip.' He has also investigated and taught broadly in areas such as materials synthesis and processing, multiscale simulation of reactive processes, chemical kinetics and transport processes."

Jensen's long list of honors includes membership in the National Academy of Engineering; appointment as a fellow of the Royal Society on Chemistry (London); an honorary doctorate from the Danish Technical University; a Guggenheim Fellowship; and the distinguished Colborn Award from the American Institute of Chemical Engineers.

Magnanti thanked outgoing department head Robert C. Armstrong, the Chevron Professor of Chemical Engineering, "for his simply outstanding service ... The department has thrived over the past 10 (almost11) years under his superb leadership. It has been a privilege to work closely with Bob ever since I became dean and I very much look forward to collaborating with Klavs in the months ahead."