Gilliam fellowship winner is committed to health research and outreach 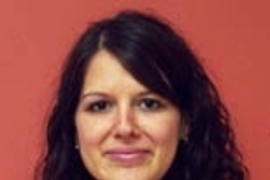 Irene C. Blat, a research technician at the Broad Institute of MIT and Harvard, has received one of five 2007 Gilliam Fellowships from the Howard Hughes Medical Institute. The fellowships provide support for up to five years of study toward a Ph.D. in the life sciences for students underrepresented in the sciences.

Gilliam fellows are selected from a pool of students who participated in HHMI's Exceptional Research Opportunities Program (EXROP), a program that offers research experiences for disadvantaged and minority undergraduates. Over the past four summers, 188 EXROP students have conducted research in the labs of HHMI investigators and professors.

The fellowships are named for the late James H. Gilliam Jr., a charter trustee of HHMI who spent his life fostering excellence and diversity in education and science.

Blat, a native of Charlotte, N.C., became interested in biology as a teenager helping her family resettle a group of Cuban refugees who had been granted political asylum in the United States. She witnessed the difficulty that immigrants had obtaining adequate medical care. This inspired Blat, whose family is from Venezuela and who speaks fluent Spanish, to become a volunteer translator at free medical clinics in Charlotte. "There's a real need for Spanish speakers at these medical clinics to translate basic health information for Hispanic immigrants," she explained.

As part of her clinic work, Blat and other volunteers in Charlotte went door-to-door to educate members of the Latino community about health and disease. As an undergraduate biology major at Duke University, Blat continued volunteering to translate health information for the Hispanic community in Raleigh-Durham. Those experiences motivated her to combine her interest in public health with her fascination with basic science.

In the summer she spent in MIT Professor Tania Baker's lab, Blat studied MuB, a protein that regulates how a virus that infects cells using a strategy similar to the HIV virus interacts with the host cell DNA. She designed several mutants of MuB in which a specific amino acid was altered, in an attempt to understand the molecular interactions of the protein. "Even obstacles to the research were thought-provoking," Blat said of her experience.

Baker was impressed that Blat took on this challenging biochemistry research project before she had even studied biochemistry. "She did beautifully, teaching herself biochemistry while carrying out her experiments," said Baker. "She clearly has what it takes to be a successful researcher."

After earning a B.S. in biology with a concentration in pharmacology, Blat became a research technician at the Broad Institute, where she worked on the Connectivity Map--a project overseen by HHMI investigator Todd Golub that uses gene expression patterns to make connections between drugs, genes and diseases. Blat was an author on a paper about the project published in Science on Sept. 29, 2006. With her Gilliam fellowship, she plans to attend graduate school but has not yet decided on a program.

Although she wants to become an academic researcher, Blat has not lost the social conscience that first drove her to volunteer at the clinic in Charlotte. "It's important for researchers to be involved with what's going on in the community," she said.