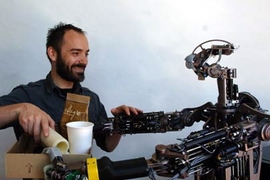 ↓ Download Image
Caption: MIT postdoctoral associate Aaron Edsinger gets some help from Domo, an assistive robot he has been developing for the last three years.
Credits: Photo / Donna Coveney 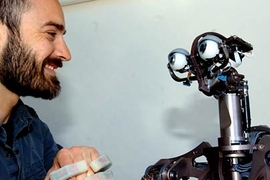 ↓ Download Image
Caption: An assistive robot has to be able to sense when a human is touching it. Domo has springs in its arms, hands and neck that can sense force and respond to it.
Credits: Photo / Donna Coveney

Caption:
MIT postdoctoral associate Aaron Edsinger gets some help from Domo, an assistive robot he has been developing for the last three years.
Credits:
Photo / Donna Coveney

Caption:
An assistive robot has to be able to sense when a human is touching it. Domo has springs in its arms, hands and neck that can sense force and respond to it.
Credits:
Photo / Donna Coveney

Such a vision of robotic housekeeping is likely decades away from becoming reality. But at MIT, researchers are working on a very early version of such intelligent, robotic helpers--a humanoid called Domo who grasp objects and place them on shelves or counters.

A robot like Domo could help elderly or wheelchair-bound people with simple household tasks like putting away dishes. Other potential applications include agriculture, space travel and assisting workers on an assembly line, says Aaron Edsinger, an MIT postdoctoral associate who has been working on Domo for the last three years.

Edsinger describes Domo as the "next generation" of earlier robots built at MIT--Kismet, which was designed to interact with humans, and Cog, which could learn to manipulate unknown objects. Domo incorporates elements of both of those robots.

"The real potential of robots in the future is going to be realized when they can do many types of manual tasks," including those that require interaction with humans, Edsinger said.

There are now plenty of robots doing manual work on factory assembly lines, but those machines follow a script and can't learn to adapt to new situations, as Domo can, said Rodney Brooks, director of MIT's Computer Science and Artificial Intelligence Laboratory.

"Robots in an automobile factory manipulate objects, but they do the same thing, along the same path, every time," Brooks said. "If robots are ever going to be truly useful, they need to be able to manipulate the objects we manipulate."

Living in the real world

Edsinger's team, overseen by Brooks, decided to focus on making a robot that can function in a real human environment--in someone's kitchen, for example. Robots that are designed to help people in their homes will have to be able to ignore the clutter found in most environments and focus only on certain stimuli, says Edsinger.

"Typically robots are placed in very restricted worlds because then you can control the environment. If you put a robot in someone's home, that approach just doesn't extend to that," he said. "We want the robot to adapt to the world, not the world to adapt to the robot."

Perched on a table in Edsinger's workspace, Domo can "see" everything going on in front of it. As the robot's large blue eyes roam across the room, cameras feed information to 12 computers that analyze the input and decide what to focus on.

Domo's visual system is attuned to unexpected motion, allowing it to focus on important stimuli within human environments. For example, locating human faces is critical for social interaction, and people are often in motion. When Domo spots motion that looks like a face, it locks its gaze onto it.

Edsinger recently demonstrated how Domo can interact with people to help them accomplish useful tasks.

Once he captures Domo's gaze, they exchange greetings. "Hey, Domo," Edsinger says, to which Domo responds, "Hey, Domo." "Shelf, Domo," says Edsinger, prompting the robot to find a shelf. Domo looks around until it spots a nearby table that looks promising. The robot reaches out its left hand to touch the shelf, much like a person groping for a light switch in the dark, to make sure the shelf is really there.

Once Domo has located the shelf, it reaches out its right hand towards Edsinger, who places a bag of coffee beans in the open hand. Domo wiggles them a little to get a feel for the object, then transfers the bag from its right hand to its left hand (nearest the shelf). Domo then reaches up and places the bag on the shelf.

Though it seems like a minor movement, wiggling the object is key to the robot's ability to accurately place it on a shelf, Edsinger says. Domo is programmed to learn about the size of an object by focusing on the tip of the object, for example, the cap of a water bottle. When the robot wiggles the tip back and forth, it can figure out how big the bottle is and decide how to transfer it from hand to hand or to place it on a shelf.

"You can hand it an object it's never seen before, and it can find the tip and start to control it," Edsinger said.

The philosophy behind the team's approach is that humans and robots can work together to accomplish tasks that neither could do all alone.

"If you can offload some parts of the process and let the robot handle the manual skills, that is a nice synergistic relationship," Edsinger said. "The key is that it has to be more useful or valuable than the effort put into it."

For Domo or any robot to safely interact with humans, the robot has to be able to sense when a human is touching it. Domo has springs in its arms, hands and neck that can sense force and respond to it. If you grab its hand and push, the robot will move the way you want it to.

"By placing that spring in there, you get physical compliance that makes the whole body sort of springy, which makes it safer for human interaction," Edsinger said. But if you apply too much force or move Domo's arms in the wrong direction, it voices its displeasure by saying "ouch."

If robots are going to be useful in the home, it's also important for them to have a humanoid form, so people will feel more comfortable around them.

Such assistive robots could be very useful in finding solutions to the impending health care crisis caused by the aging of the baby boomers, Edsinger said. Having help with simple tasks, such as getting a glass from a cabinet, could make a big difference for elderly or wheelchair-bound people.

The original work on Domo was funded by NASA, and the project is now supported by Toyota, which is interested in developing partner robots for the home. Another application is in assembly line production. The idea is that intelligent robots could work together with people to make workers more productive and save manufacturing jobs from being sent overseas, says Edsinger.

Although a life of leisure enabled by robots who perform all manual labor is still securely in the realm of science fiction, Brooks says he can foresee a future where robots specialized for different functions help out with household chores.

"I don't think there's going to be one Rosie the robot doing everything in the home," said Brooks. "It's more likely to be a team of robots doing different things."