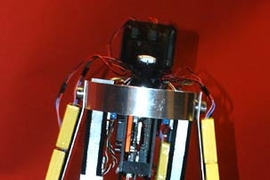 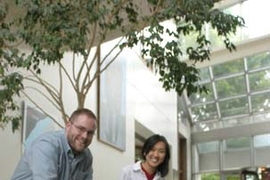 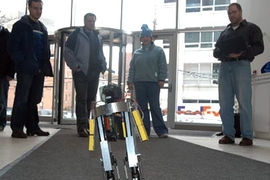 ↓ Download Image
Caption: MIT's 'robotoddler' walks down a carpet as an appreciative audience looks on.

Caption:
MIT's 'robotoddler' walks down a carpet as an appreciative audience looks on.
Credits:
Photo:
Three independent research teams, including one from MIT, have built walking robots that mimic humans in terms of their gait, energy-efficiency and control. The MIT robot also demonstrates a new learning system that allows it to continually adapt to the terrain as it walks.

The work, which is described in the Feb. 18 issue of the journal Science, could change the way humanoid robots are designed and controlled. It also has potential applications for robotic prostheses and it could aid scientists' understanding of the human motor system.

Developed at MIT, Cornell and Holland's Delft University of Technology, the three robots are all based on the same principle — they are an extension of several years of research into "passive-dynamic walkers" that walk down a shallow slope without any motors. Passive-dynamic walkers were inspired by walking toys that have been around since the 1800s.
Robotic Toddler

Control programs in the Cornell and Delft robots are extremely simple, because a large portion of the control problem is solved in the mechanical design. The MIT robot uses customized learning software that exploits this design, allowing the robot to teach itself to walk in less than 20 minutes, or about 600 steps.

Dubbed "Toddler" because it learns to walk and because it toddles when it does so, the robot "is one of the first walking robots to use a learning program, and it is the first to learn to walk without any prior information built into the controller," said Russ Tedrake, a postdoctoral associate in MIT's Department of Brain and Cognitive Sciences.

Among other things, the learning program allows the robot to navigate efficiently over a variety of walking surfaces; it may eventually allow robots to navigate very rough terrain. That's because the program works so quickly that Toddler is able to continuously adapt to the terrain as it walks.

Tedrake demonstrated Toddler at a press briefing Feb. 17 at the annual meeting of the American Association for the Advancement of Science in Washington, D.C. His co-authors of the Science paper are Professor Andy Ruina of Cornell, Steven Collins of the University of Michigan, and Martijn Wisse of Delft.

Tedrake's MIT advisor on the work is Professor Sebastian Seung of the Department of Brain and Cognitive Sciences. The project involved a number of MIT students that participated through the Undergraduate Research Opportunities Program, including seniors Ming-fai Fong and Andrew Baines and junior Derrick Tan. The version of the robot featured in Science was designed and built by Tedrake and Teresa Weirui Zhang, an alumna of MIT's Department of Mechanical Engineering.

The three robots are quite energy efficient. Cornell's "seems to be at least 10 times more efficient than anybody else's," said Ruina. Rough calculations suggest that it approaches human efficiency, consuming an amount of energy per unit weight and distance comparable to a human walker. The MIT and Delft robots, though not built deliberately to be energy efficient, still use much less energy than, say, their famous cousin, Honda's humanoid robot Asimo.

How do they move? The Cornell robot supplies power to the ankles to push off. When the forward foot hits the ground, a simple microchip controller tells the rear foot to push off. The Delft robot uses a pneumatic push at the hip, and the MIT robot uses electric motors that directly move the ankle. All three robots have arms synchronized to swing with the opposite leg for balance.

The robot work was done primarily to study the biomechanics and control of human locomotion, but it could have applications in practical robotics. Collins, for example, is applying some of what he's learned to the design of a powered prosthetic foot for amputees.

This work was supported in part by the National Science Foundation, the MIT Center for Bits and Atoms, the David and Lucille Packard Foundation, and the Howard Hughes Medical Institute.