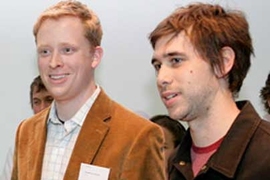 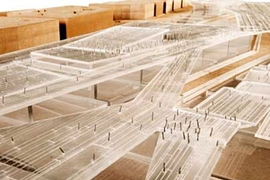 Caption:
The students' test of the Crowd Farm in a train station and public space in Torino, Italy.
Credits:
Graphic / James Graham and Thaddeus Jusczyk

Two graduate students at MIT's School of Architecture and Planning want to harvest the energy of human movement in urban settings, like commuters in a train station or fans at a concert.

The so-called "Crowd Farm," as envisioned by James Graham and Thaddeus Jusczyk, both M.Arch candidates, would turn the mechanical energy of people walking or jumping into a source of electricity. Their proposal took first place in the Japan-based Holcim Foundation's Sustainable Construction competition this year.

A Crowd Farm in Boston's South Station railway terminal would work like this: A responsive sub-flooring system made up of blocks that depress slightly under the force of human steps would be installed beneath the station's main lobby. The slippage of the blocks against one another as people walked would generate power through the principle of the dynamo, a device that converts the energy of motion into that of an electric current.

The electric current generated by the Crowd Farm could then be used for educational purposes, such as lighting up a sign about energy. "We want people to understand the direct relationship between their movement and the energy produced," says Jusczyk.

The Crowd Farm is not intended for home use. According to Graham and Jusczyk, a single human step can only power two 60W light bulbs for one flickering second. But get a crowd in motion, multiply that single step by 28,527 steps, for example, and the result is enough energy to power a moving train for one second.Â

And while the farm is an urban vision, the dynamo-floor principle can also be applied to capturing energy at places like rock concerts, too. "Greater movement of people could make the music louder," suggests Jusczyk.

The students' test case, displayed at the Venice Biennale and in a train station in Torino, Italy, was a prototype stool that exploits the passive act of sitting to generate power.Â The weight of the body on the seat causes a flywheel to spin, which powers a dynamo that, in turn, lights four LEDs.

"People tended to be delighted by sitting on the stool and would get up and down repeatedly," recalls Graham.

Other people have developed piezo-electric (mechanical-to-electrical) surfaces in the past, but the Crowd Farm has the potential to redefine urban space by adding a sense of fluidity and encouraging people to activate spaces with their movement.

"Our intention was to think of it not as a high-tech mat that would be laid down somewhere, but to really integrate it into a new sort of building system," Graham says.

The Crowd Farm floor is composed of standard parts that are easily replicated but it is expensive to produce at this stage, they said. "Only through experimentation - which can be expensive - do technologies become practical," Graham says.

Graham and Jusczyk rely on bicycles, rather than trains or buses, for their commute to MIT. But, both students were impressed enough by recent experiences in large crowds - for Graham, the 2003 New York City blackout; for Jusczyk, Boston's World Cup celebration in City Hall Plaza - to start work on the Farm. The students were inspired as well by an "ingenious little device by Thomas Edison. When visitors came to his house, they passed through a turnstile that pumped water into his holding tank," says Graham. In addition, they were guided by their advisor, Associate Professor J. Meejin Yoon, who helped them take their proposal from the power-stool to the Crowd Farm.