Storing carbon dioxide below ground may prevent polluting above 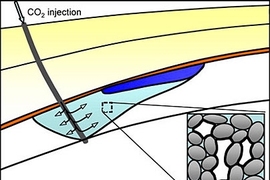 ↓ Download Image
Caption: Carbon dioxide could be injected underground into the briny porous rock below. Most of the CO2 gas would be immobilized (light blue), trapped as small bubbles (white) in the pore space of the rock (gray). Only a small portion of the CO2 (dark blue) will continue to flow up towards the impermeable layer of caprock (yellow).
Credits: Image / Ruben Juanes

Caption:
Carbon dioxide could be injected underground into the briny porous rock below. Most of the CO2 gas would be immobilized (light blue), trapped as small bubbles (white) in the pore space of the rock (gray). Only a small portion of the CO2 (dark blue) will continue to flow up towards the impermeable layer of caprock (yellow).
Credits:
Image / Ruben Juanes

A new analysis led by an MIT scientist describes a mechanism for capturing carbon dioxide emissions from a power plant and injecting the gas into the ground, where it would be trapped naturally as tiny bubbles and safely stored in briny porous rock.

This means that it may be possible for a power plant to be built in an appropriate location and have all its carbon dioxide emissions captured and injected underground throughout the life of the power plant, and then safely stored over centuries and even millennia. The carbon dioxide eventually will dissolve in the brine and a fraction will adhere to the rock in the form of minerals such as iron and magnesium carbonates.

Carbon dioxide is one of the primary greenhouse gases contributing to global warming. Studies have shown that reducing carbon dioxide emissions or capturing and storing the emissions underground in a process called sequestration is vital to the health of our planet. But one of the biggest risks of any sequestration project is the potential leak of the injected gas back into the atmosphere through abandoned wells or underground cracks.

In a paper published in a recent issue of Water -Resources Research, MIT Professor Ruben Juanes and co-authors assert that injected carbon dioxide will likely not flow back up to the surface and into the atmosphere, as many researchers fear.

"We have shown that this is a much safer way of disposing of CO2 than previously believed, because a large portion--maybe all--of the CO2 will be trapped in small blobs in the briny aquifer," said Juanes, a professor of civil and environmental engineering. "Based on experiments and on the physics of flow and transport, we know that the flow of the CO2 is subject to a safety mechanism that will prevent it from rising up to the top just beneath the geologic cap."

The study shows that carbon dioxide could be compressed as it leaves the power plant and injected through a well deep underground into a natural sublayer consisting of porous rock, such as sandstone or limestone, saturated with saltwater. Because of its buoyancy, the injected gas will form a plume and begin to rise through the permeable rock. Once the injection stops, the plume will continue to rise, but saltwater will close around the back of the gas plume. The saltwater and CO2 will juggle for position while flowing through the tiny pores in the rock. Because the rock's surface attracts water, the water will cling to the inner surface of the pores. These wet layers will swell, causing the pores to narrow and constrict the flow of carbon dioxide until the once-continuous plume of gas breaks into small bubbles or blobs, which will remain trapped in the pore space.

"As it rises, the CO2 plume leaves a trail of immobile, disconnected blobs, which will remain trapped in the pore space of the rock, until they slowly dissolve and, on an even larger timescale, react with rock minerals," said Juanes. "It is a good example of how a process that occurs at the microscopic scale affects the overall pattern of the flow at the geologic scale."

"We also found that by injecting water along with the CO2, we can optimize sequestration," said Elizabeth Spiteri of Chevron Energy Technology Co., who worked on this research while a graduate student at Stanford University, where Juanes taught before joining the MIT faculty. "I had always wanted to dig deeper into the physics that dictate the distribution of gases and liquids in the Earth's subsurface. This turns out to be essential for CO2 sequestration, as well as predicting groundwater contamination and enhancing recovery from mature oil fields.

Other co-authors are Martin Blunt of Imperial College London and Franklin Orr Jr. of Stanford University. The work was funded by industrial affiliates of the Petroleum Research Institute at Stanford.