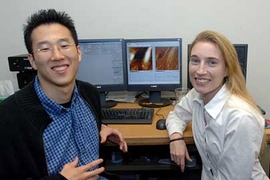 ↓ Download Image
Caption: Graduate student and lead author Sunyoung Lee and Professor Krystyn Van Vliet in the lab with images of cell surfaces on the monitor behind them.
Credits: Photo / Donna Coveney

Caption:
Graduate student and lead author Sunyoung Lee and Professor Krystyn Van Vliet in the lab with images of cell surfaces on the monitor behind them.
Credits:
Photo / Donna Coveney

MIT researchers have found a way to glimpse interactions between molecules on the surface of a cell.

By measuring the force generated by these cell surface interactions, the MIT team was able to image and measure the rate at which individual molecules join and separate from receptors on the cell surface. These interactions are not visible with traditional light microscopy.

"We were able to measure regions of strong intermolecular binding on the cell surfaces, which enabled us to map the locations of the receptors," said Sunyoung Lee, a graduate student in the Department of Materials Science and Engineering and lead author of a paper on the work in the June 5 issue of the Proceedings of the National Academy of Sciences.

The technique, known as functionalized force imaging, could allow researchers to better understand the strength and rates of interactions between molecular ligands outside the cell and the molecular receptors on the cell surface. These interactions play a critical role in cell growth, proliferation and differentiation. It could also assist in the design and testing of new drug molecules that bind strongly or quickly to the target cell.

Receptors on the cell surface allow the cell to maintain constant communication with its environment--they bind to molecules that convey information about the environment and instructions telling them what functions to carry out. In this study, the researchers looked at a receptor called vascular endothelial growth factor receptor-2 (VEGFR2), which is important for the proliferation, migration and differentiation of the vascular endothelial cells that line blood vessels.

Researchers in the lab of Krystyn Van Vliet, senior author of the PNAS study, are working to understand the kinetics of cell-molecule interactions and how a cell responds to mechanical and chemical changes in its environment. These changes in function can be evidenced by the number and type of receptors displayed on their surfaces.

"You can ask specific questions about how the mechanical and chemical stimuli outside the cell generate changes in cell surfaces and structures within the cell," said Van Vliet, the Thomas Lord Assistant Professor of Materials Science and Engineering.

With traditional light-based (optical) microscopy, you can see large cell structures like the nucleus and cytoskeleton, but not tiny molecules such as individual receptors on the living cell surface. To achieve the nanometer-scale spatial resolution required to see these molecules on the cell surface, the researchers used mechanical force, rather than light.

To pull a bound molecule from its target receptor, a very small force of about 100 piconewtons is required. The researchers measured that force by attaching anti-VEGFR2 antibody molecules to the end of a cantilevered probe in a scanning probe microscope. The cantilever oscillates in a regular pattern as it scans along the cell surface, and whenever the pattern is disturbed, the researchers can infer that the antibody on the probe has bound or "stuck" to its target receptor, VEGFR2.

By mapping those reversible interactions at every point on the cell surface, the researchers can determine where the receptors are located with respect to other cell structures. More importantly, said Van Vliet, they can follow the molecular interactions on the cell over time, allowing them to determine the binding kinetics, or the rate at which molecules join and separate from the cell surface.

The force-based imaging also allows for visualization of the stiff cytoskeleton underneath the cell surface, which provides internal structure for the cell. By overlapping images of the cytoskeleton and the VEGF receptors, the researchers found that most of the receptors were located near the cytoskeleton. Such correlations support the current hypothesis that VEGF receptor function is linked to that of other cell surface proteins including integrins, which transmit mechanical forces from the outside to the inside of the cell, Van Vliet said.

Other researchers have used this approach to measure binding forces in isolated proteins, but the MIT team shows that these tiny forces can also be used to visualize binding kinetics on chemically fixed (nonliving) cells and living cells.

"It's challenging to do this on cells because their surfaces are made up of many different kinds of molecules, which makes them topographically rough, chemically diverse, and mechanically compliant," said Van Vliet.

Van Vliet and Lee outlined several possible applications of functionalized force imaging on endothelial, cancer and stem cells, including identification of target receptors for cell-specific drugs; comparison of kinetics for individual and clustered receptors; and visualizing how the mechanical stiffness of extracellular materials alters cell function and cell surface receptor activity over time.

The research was funded by the National Science Foundation Nanoscale Exploratory Research, the Center for the Integration of Medicine and Innovative Technology, the Hugh Hampton Young Memorial Foundation and the Beckman Foundation Young Investigators Program.