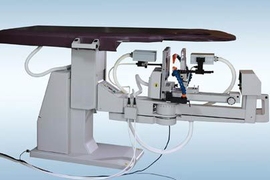 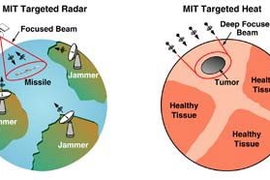 Treating breast cancer with a type of heat therapy derived from MIT radar research can significantly increase the effectiveness of chemotherapy, according to results from the fourth clinical trial of the technique reported online Nov. 25 in the journal Cancer Therapy.

"It appears that heating the tumors drastically increased the effectiveness of the chemotherapy," said Dr. William C. Dooley, director of surgical oncology at the University of Oklahoma and the principal investigator of the study. "The tumors shrank faster and died faster using the additional microwave hyperthermia on top of the chemotherapy."

In the latest clinical trial, fifteen patients received two microwave heat treatments, known as thermotherapy, along with four rounds of chemotherapy before surgery. The goal was to shrink tumors sufficiently to enable a breast-conserving lumpectomy procedure instead of the expected, and more invasive, mastectomy. Surgeons concluded that fourteen of the tumors shrunk enough for this to be possible.

In 1990, Dr. Alan J. Fenn, a senior staff member at MIT's Lincoln Laboratory, adapted the thermotherapy treatment from a system that used focused microwaves to detect missiles and block out interfering enemy signals.

"It's a very simple idea that can be applied to the treatment of many different cancers, including breast cancer," Fenn said.

The microwaves, delivered by two applicators placed near the breast, kill the cancerous tissue while preserving normal breast tissue by targeting tumor cells that contain high amounts of both water and ions, Fenn explained. When the microwave energy passes through the tumor, the water molecules begin to vibrate and generate heat through friction. This process eventually elevates the cancer cells to a "high fever" of at least 108 degrees Fahrenheit in most cases, killing them.

"The treatment is well tolerated," said Dr. Mary Beth Tomaselli, medical director at Comprehensive Breast Center in Coral Springs, Fla., and a surgeon who was also a co-investigator in the study. "The patients who have gone through it had minimal side effects and positive results."

This is the fourth clinical trial of the therapy since 1999. In a Phase-I safety trial using microwave heat alone, researchers found that both small and large breast tumors could be decreased in size between 30 and 60 percent. In a Phase-II dose-escalation trial for small tumors, scientists increased the amount of heat until 100 percent of the tumor cells were killed, prior to the patients' receiving a lumpectomy.

Next, researchers treated similar early-stage tumors and noticed that after the surgical removal, none of the patients had tumor cells remaining at the edge of the incision. This is important because additional breast surgery and/or radiation therapy are often recommended for patients that have cancer cells close to the edge of the lumpectomy surgical margin.

The team has applied for approval for a large-scale clinical trial from Health Canada (the equivalent of the US FDA) and will be applying for the same approval from the FDA. Researchers will then test the treatment in a randomized study of 228 patients who have large breast-cancer tumors. Patients will receive either chemotherapy alone or chemotherapy plus microwave heat treatments at one of six participating medical centers in the United States and Canada.

"The patients who have the best results in cancer treatment, at least with breast cancer, are patients who have a sequence of different therapies, including chemotherapy, surgery, radiation, and hormones," said Dr. Hernan I. Vargas, associate professor of surgery at UCLA and lead author of the recent study. "Each one of the treatments adds a little bit. The thermotherapy might be one more tool that helps us fight this disease."

Dr. Jay K. Harness of St. Joseph's Hospital in Orange, Calif., was also an author of the Cancer Therapy article.