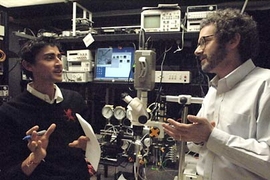 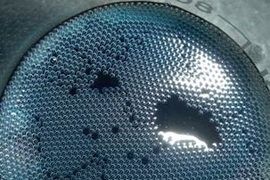 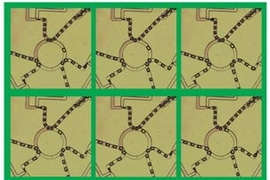 ↓ Download Image
Caption: A colored montage of a ring oscillator used in the microfluidic computer developed by researchers at MIT. Starting with top left image, and reading left to right, the yellow bubble flows around the ring until it reaches and joins a stream of bubbles.
Credits: Image / Felice Frankel and Manu Prakash, MIT

Caption:
MIT researchers have developed a computer chip that runs on microbubbles like these.
Credits:
Photo courtesy / Manu Prakash

Caption:
A colored montage of a ring oscillator used in the microfluidic computer developed by researchers at MIT. Starting with top left image, and reading left to right, the yellow bubble flows around the ring until it reaches and joins a stream of bubbles.
Credits:
Image / Felice Frankel and Manu Prakash, MIT

The team, based at MIT's Center for Bits and Atoms, reports that the bubbles in their microfluidic device can carry on-chip process control information, just like the electronic circuits of a traditional microprocessor, while also performing chemical reactions. The work will appear in the Feb. 9 issue of Science.

"Bubble logic merges chemistry with computation, allowing a digital bit to carry a chemical payload. Until now, there was a clear distinction between the materials in a reaction and the mechanisms to control them," said co-author Neil Gershenfeld, director of the Center for Bits and Atoms.

Microfluidics allow scientists to create tiny chips where nanoliters of fluids flow from one part of the chip to another, undergoing controlled chemical reactions in different parts of the chip and replacing the conventional test tubes and glassware used for chemistry for centuries.

The technology has the potential to revolutionize large-scale chemical analysis and synthesis, environmental and medical testing and industrial production processes, but applications outside of the laboratory have been limited so far by the external control systems--valves and plumbing--required for its operation.

But now, the MIT researchers are able to control microfluidic chips via the interactions of bubbles flowing through microchannels, eliminating the need for external controls. "Now you can program what's happening inside the lab on a chip, by designing bubble logic circuits that function just like their electronic counterparts," said Manu Prakash, Gershenfeld's co-author and graduate student.

Controlling chemical reactions will likely be a primary application for the chips, according to the researchers. It will be possible to create large-scale microfluidic systems such as chemical memories, which store thousands of reagents on a chip (similar to data storage), using counters to dispense exact amounts and logic circuits to deliver them to specific destinations.

Other applications include combinatorial synthesis of many compositions at the same time, programmable print heads that can deposit a range of functional materials, and sorting biological cells.

The researchers modeled their new microfluidic chips on the architecture of existing digital circuits. But instead of using high and low voltages to represent a bit of information, they use the presence or absence of a bubble. They report on nitrogen bubbles in water, but any other combinations of materials that don't mix would work, such as oil and water.

In the Science paper they demonstrate all of the elements needed for any new logic family, including gates, memories, amplifiers and oscillators. The speed of operation is about 1,000 times slower than a typical electronic microprocessor, but 100 times faster than the external valves and control systems used in existing microfluidic chips. Gershenfeld and Prakash anticipate that its invention will allow existing circuit designs (and designers) to work in the domain of microfluidics.

The research was supported by MIT's Center for Bits and Atoms, an interdisciplinary initiative exploring the boundary between physical science and computer science, with funding from the National Science Foundation.