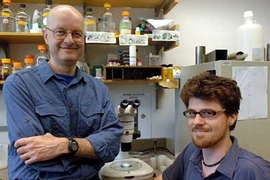 Caption:
Biology professor Leonard Guarente, left, and postdoctoral associate Nicholas Bishop, in the lab where they have been studying longevity in the nematode worm Caenorhabditis elegans.
Credits:
Photo / Donna Coveney

The link between calorie restriction and a longer, healthier life may lie in the head, not in the gut, MIT biologists report.

Dietary restriction extends lifespan and retards age-related disease in many species, although the phenomenon's underlying mechanisms remain a mystery. Underfeeding an organism such as the ordinary roundworm alters its endocrine function, which regulates hormones instrumental in metabolism. But no connection between the longevity induced by calorie restriction and the endocrine system has been found--until now.

In a recent issue of Nature, Leonard P. Guarente, Novartis Professor of Biology, and postdoctoral associate Nicholas A. Bishop show that a particular pair of neurons in the heads of underfed worms may play an essential role in their lengthy lives. When these two individual neurons were killed by a laser beam, the worms could not enjoy the longevity normally associated with calorie restriction.

Restricting calories activates a gene in two neurons, Guarente and Bishop report. The gene, called skn-1, is found in a particular pair of sensory neurons in the head of the nematode worm Caenorhabditis elegans. These neurons are critical in translating information about food availability into endocrine signals. The neurons lead peripheral tissues to increase their metabolic activity, and this enhanced metabolism makes the worms live longer than normally fed counterparts.

In the study, the researchers also confirmed the results with a genetic test: They showed that skn-1 genes expressed only in these two cells support dietary-restriction longevity; without the genes, the longevity increase on dietary restriction disappeared. At the same time, the lack of skn-1 genes had little or no effect on the lifespan of worms whose calorie intake was not restricted, Guarente said.

"We suspect that the two neurons sense dietary restriction and secrete a hormone that increases metabolism--and life span--in the animal," he said.

Guarente, who published "Ageless Quest: One Scientist's Search for Genes that Prolong Youth" in 2003, discovered in 2000 that calorie restriction activates the silenced information regulator (SIR2) gene, which has the apparent ability to slow aging. This gene makes a protein called Sir2, which Guarente has shown is integrally tied to extending life span in yeast and in the roundworm. Humans carry a similar gene. How Sir2 relates to the two neurons identified in the findings is not yet clear, Guarente said.

Guarente suggests that the first commercial products based on manipulating Sir2 to slow aging will appear in the next 10 to 20 years. It is only a matter of time, he said, before aging itself is declared a disease.

This work is supported by the National Institutes of Health and the Glenn Foundation.