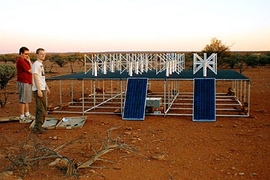 A novel telescope that will aid the understanding of the early universe is moving closer to full-scale construction thanks to a $4.9 million award from the National Science Foundation to a U.S. consortium led by MIT.

The Mileura Widefield Array - Low Frequency Demonstrator (LFD), which is being built in Australia by the United States and Australian Partners, will also allow scientists to better predict solar bursts of superheated gas that can play havoc with satellites, communication links and power grids. In support of the solar observations, the Air Force Office of Scientific Research also recently made a $0.3M award to MIT for array equipment.

"The design of the new telescope is tightly focused on frontier experiments in astrophysics and heliospheric science. We plan to harness the enormous computing power of modern digital electronic devices, turning thousands of small, simple, cheap antennas into one of the most potent and unique astronomical instruments in the world," said Colin J. Lonsdale, the project's leader at MIT's Haystack Observatory.

Shortly after the Big Bang, the universe was a nearly featureless sea of dark matter and gas. How did structures such as our galaxy form from this bland uniformity? Over time, gravity slowly drew condensations of matter together, creating patches of higher and lower density. At some point, enough gas became concentrated into a small enough space that complex astrophysical processes were triggered, and the first stars were born.

In principle, we can see how and when this happened by looking to the farthest reaches of the universe, because as we look at greater distances, we also look back in time. Finding these first stars, and the primordial galaxies within which they ignited, is a primary mission of the LFD.

How will the telescope accomplish this?

It turns out that hydrogen, which made up most of the ordinary matter in the early universe, efficiently emits and absorbs radio waves. It is these radio waves, stretched by the expansion of the universe, which can be detected, measured and analyzed by the new telescope. By spotting the fluctuations in brightness across broad swaths of sky at these wavelengths, we can discover the state of the hydrogen gas when the universe was a tiny fraction of its current age.

"Radio astronomical telescopes operating at low frequency provide an opportunity to witness the formation of the first stars, galaxies and clusters of galaxies, and to test our theories of the origin of structure," said Jacqueline Hewitt, director of the MIT Kavli Institute and a professor of physics. She added that "direct observation of this early epoch of structure formation is arguably one of the most important measurements in astrophysical cosmology still to be made."

Professor Rachel Webster of the University of Melbourne said, "We also hope to see spherical holes created by early quasars [active cores of galaxies] in the smooth distribution of primordial hydrogen. These will appear as small dark spots where the quasar radiation has split the hydrogen apart into protons and electrons."

Sometimes, the sun gets violent. Huge bursts of superheated gas, or plasma, are ejected into interplanetary space and race outward on a collision course with the Earth. These so-called "coronal mass ejections" and the flares with which they are associated, are responsible for the polar light shows known as auroras. They can also, however, play havoc with satellites, communication links and power grids, and can endanger astronauts.

The impact of these plasma ejections can be predicted, but not very well. Sometimes, the ejected material is deflected by the Earth's magnetic field and Earth is shielded. At other times, the shield fails and widespread damage can ensue. The difference is due to the magnetic properties of the plasma.

To improve the predictions and provide reliable advance warning of adverse space weather, scientists must measure the magnetic field that permeates the material. Until now, there has been no way to make that measurement until the material is near Earth.

The LFD promises to change that. The telescope will see thousands of bright radio sources. The plasma ejected from the sun changes those sources' radio waves as they pass through, but in a way that depends on the magnetic field strength and direction. By analyzing those changes, scientists will at last be able to deduce the all-important magnetic field properties of coronal mass ejections.

"This is the most crucial measurement to be made in support of our National Space Weather Program, since it would provide advance notice about the space weather effects on Earth well ahead of the time of impact of the plasma burst," said Joseph Salah, director of the Haystack Observatory.

The LFD will be an array of 500 antenna "tiles" spread out over an area 1.5 kilometers, or almost a mile, in diameter. Each tile is about 20 feet square and consists of 16 simple and cheap dipole antennas, fixed on the ground and staring straight up.

Big conventional telescopes are characterized by huge concave disks that tip and tilt to focus on specific areas of the sky. Thanks to modern digital electronics, the LFD tiles can also be "steered" in any direction -- but no moving parts are required. Rather, the signals, or data, from each small antenna are brought together and analyzed by powerful computers. By combining the signals in different ways, the computers can effectively "point" the telescope in different directions.

This concept has been tested at the proposed Radio Astronomy Park at Mileura in Western Australia with three prototype tiles "lovingly wired together by hand" by MIT and Australian graduate students and researchers, Hewitt said. "The tiles performed very nicely. We were quite pleased with them."

Why Mileura? The LFD telescope will operate at the same radio wavelengths where FM radio and TV broadcasts are normally found. So if it were sited near a busy metropolis, signals from the latter would swamp the radio whispers from the deep universe. The planned site at Mileura, however, is exceptionally "radio quiet" and is also highly accessible.