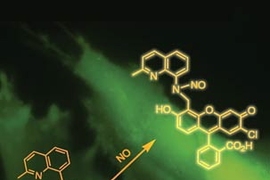 ↓ Download Image
Caption: A new sensor developed at MIT monitorsÂ when cultured neuroblastoma cells (green)Â are producing nitric oxide (NO). A copper complex of a fluorescein derivative (formula on lower left) reacts with NO and produces a nitrosated fluorescein (formula on upper right), which causes the cells to glow brightly under the fluorescent microscope.
Credits: Photo courtesy / Christy Tinberg and Mi Hee Lim, Lippard Lab 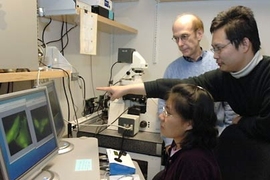 Caption:
A new sensor developed at MIT monitorsÂ when cultured neuroblastoma cells (green)Â are producing nitric oxide (NO). A copper complex of a fluorescein derivative (formula on lower left) reacts with NO and produces a nitrosated fluorescein (formula on upper right), which causes the cells to glow brightly under the fluorescent microscope.
Credits:
Photo courtesy / Christy Tinberg and Mi Hee Lim, Lippard Lab

MIT scientists have discovered a way to monitor a crucial molecule as it goes about its business within living cells.

The molecule, nitric oxide (NO), plays critical roles in the human body -- from the destruction of invading microorganisms to the relaying of neural signals.

But catching NO at work has long eluded scientists because it often exists in minute concentrations and for only short periods of time. Now, MIT chemists have developed a bright fluorescent sensor that, in conjunction with microscopy, captures and illuminates NO in living, functioning cells.

The work, reported May 28 in the online issue of Nature Chemical Biology, will aid scientists' understanding of how and when NO operates.

Stephen J. Lippard, the Arthur Amos Noyes Professor of Chemistry at MIT, developed the sensor with an eye toward understanding the role of NO in neural activity. But this work has broad biological applications since NO is produced throughout the body. "Our goal is to detect its formation in spatio-temporal terms, to see where and when it is produced in a cell, and in which collections of cells, and to connect its production with underlying chemical signaling events," Lippard said.

Until the 1990s, scientists mainly knew NO as a product of lightning and the combustion engine -- and as an ingredient in smog. A simple molecule consisting of one nitrogen and one oxygen atom, it contains an unpaired electron that makes it highly reactive and destructive.

"Nobody thought it would be tolerated by a cell, much less used for biological purposes," Lippard said.

Then came the stunning discovery that the peculiar blood vessel relaxer Endothelial Derived Relaxation Factor, identified in the 1980s, was actually NO. NO was then unmasked in macrophages (white blood cells), tumors, bones and neurons.

In sweat and saliva it has antibacterial properties; in Viagra, rejuvenating effects. Paradoxically, NO often has contradictory behaviors. At some levels, it lowers high blood pressure, destroys invading microorganisms and tumor cells, maintains bone mass and relays neural signals. At other levels, it causes septic shock and promotes tumors, arthritis and nerve death.

These puzzles make understanding how and when NO operates in cells all the more relevant, and that requires a better means of monitoring it as cells go about their normal business. But existing assays have either been too invasive or measured NO only indirectly.

Lippard, together with graduate student Mi Hee Lim, the first author of the study, and postdoctoral researcher Dong Xu, produced a novel NO sensor by attaching a derivative of the widely used cellular imaging agent, fluorescein, to a copper atom. The resulting complex does not fluoresce until the fluorescein, in modified form, is released -- which only happens in the presence of NO.

The sensor works in real time, in the aqueous, neutral pH conditions of tissues, and at the tiny nanomolar-concentrations of NO found in living cells.

How exclusive and selective is the NO detector? To find out, Lim and Xu made a mix of banana-shaped neuroblastomas and M&M-shaped macrophages, which each require different triggers to synthesize NO from a particular amino acid. When they triggered NO production in just the neuroblastomas, they could literally see that the sensor had selectively detected only those cells.

"That delighted me the most because we want to detect one cell type selectively in a heterogeneous population of cells," Lippard said.

Lippard plans to use such NO sensors to learn about the role of this elusive molecule in neurobiology. In the nervous system, a neuron releases NO at the synapse after receiving a signal from another neuron. NO then diffuses back to the pre-synaptic neuron and surrounding cells, perhaps to say: "I got the message."

"The ability to visualize nitric oxide at the nanomolar level in cells and tissues should be of tremendous benefit in determining its effects on long term potentiation and neuronal development," commented Michael J. Clarke, a chemist at the National Science Foundation, which funded this research.

A version of this article appeared in MIT Tech Talk on June 7, 2006 (download PDF).