George B. Thomas, mathematics professor and author, dies at 92 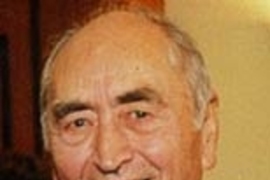 George B. Thomas, a mathematician who turned a one-year teaching appointment at MIT into a 38-year career and whose well-regarded textbook has been used around the world, died Oct. 31 of natural causes in State College, Pa. He was 92.

Thomas, known as a young teacher for his ability to communicate mathematical concepts, was hired in 1951 by publisher Addison-Wesley to revise their then-standard, widely used calculus textbook. Rather than revise, he wrote his own, a classic text that has been in use for 54 years.

At MIT, Thomas came to be regarded as an outstanding teacher, "one of the best teachers the department has ever had," according to then Department Head Ted Martin. Not only did he teach a wide variety of subjects, but he also willingly took on new courses. Administratively, he served as executive officer of the department for ten years and as graduate registration officer from 1962-67.

Thomas was born Jan. 11, 1914, in Boise, Idaho. His mother died in the influenza pandemic in 1919, and young George grew up in sometimes difficult circumstances. At one point he lived in a tent with his father and stepmother. "It must have been sort of hard times, because I can remember going out with her to pick weeds of some kind along the roadside that were edible," he recalled afterward, according to his daughter, Fay Bakhru.

His father's work in a bank helped lead Thomas to discover his own fascination with numbers. After studies at Spokane University and Washington State College, which led to bachelor's and master's degrees, Thomas hoped to become a high school math teacher, but "that somehow didn't work out," as he related afterward.

During World War II, Thomas helped program the differential analyzer for the calculation of firing tables for the Navy.

After the Soviet Union launched Sputnik in October 1957, Thomas was part of a national effort to improve math and science education in American schools. He also traveled to India on a Ford Foundation grant to teach Indian instructors how he and his American colleagues taught math.

Thomas worked in a shoe store for a time to save money for doctoral studies, and eventually went to Cornell, where he completed his Ph.D. in mathematics in 1940, and then came to MIT, from which he retired in 1978.

Thomas' commitment to education went well beyond MIT. From 1955-57, he served on the Board of Governors of the Mathematical Association of America, an organization devoted to mathematics, especially at the undergraduate level. He was elected its first Vice-President 1958-59. Thomas also served on the Executive Committee, Mathematics Division, of the American Society for Engineering Education from 1956-59. He was a member of the Commission on Mathematics of the College Entrance Examination Board, 1955-58, for which he co-authored monographs on mathematics, and spoke at numerous forums about teaching and high school curriculum reform. In addition to his calculus text, which had a significant impact, he was also one of the editors on a series of high school mathematics texts for Addison-Wesley Publishing.

A version of this article appeared in MIT Tech Talk on November 15, 2006 (download PDF).