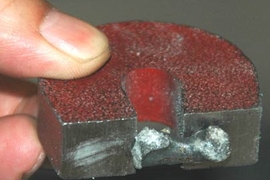 ↓ Download Image
Caption: A droplet of iron held by a magnet. The iron was produced by an MIT team using molten oxide electrolysis, which generates no carbon dioxide gases -- only oxygen.
Credits: Photo / Donald Sadoway

Caption:
A droplet of iron held by a magnet. The iron was produced by an MIT team using molten oxide electrolysis, which generates no carbon dioxide gases -- only oxygen.
Credits:
Photo / Donald Sadoway

The American Iron and Steel Institute (AISI) announced today that the team, led by Donald R. Sadoway of the Department of Materials Science and Engineering, has shown the technical viability of producing iron by molten oxide electrolysis (MOE).

"What sets molten oxide electrolysis apart from other metal-producing technologies is that it is totally carbon-free and hence generates no carbon dioxide gases -- only oxygen," said Lawrence W. Kavanagh, AISI vice president of manufacturing and technology.

The work was funded by the AISI/Department of Energy Technology Roadmap Program (TRP). The TRP goal is to increase the competitiveness of the U.S. steel industry while saving energy and enhancing the environment. According to the AISI, the MIT work "marks one of TRP's breakthrough projects toward meeting that goal."

Unlike other iron-making processes, MOE works by passing an electric current through a liquid solution of iron oxide. The iron oxide then breaks down into liquid iron and oxygen gas, allowing oxygen to be the main byproduct of the process.

Electrolysis itself is nothing new -- all of the world's aluminum is produced this way. And that is one advantage of the new process: It is based on a technology that metallurgists are already familiar with. Unlike aluminum smelting, however, MOE is carbon-free.

"What's different this time is that we have the resources to take the time to unravel the underlying basic science," said Sadoway, the John F. Elliott Professor of Materials Chemistry. "No one has ever studied the fundamental electrochemistry of a process operating at 1600ï¿½C. We're doing voltammetry at white heat!"

The result? "I now can confirm that in molten oxide electrolysis we'll see iron productivities at least five times that of aluminum, maybe as high as 10 times. This changes everything when it comes to assessing technical viability at the industrial scale."

MIT will continue further experiments to determine how to increase the rate of iron production and to discover new materials capable of extending the life of certain reactor components to industrially practical limits. This work will set the stage for construction of a pilot-scale cell to further validate the viability of the MOE process and identify scale-up parameters.