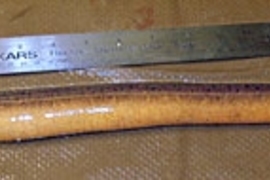 In its latest outreach campaign, MIT Sea Grant has developed an educational pamphlet to encourage people not to release or dump live and fresh seafood and seafood waste into the wild.

"Live and Fresh Seafood: Into the Pan, Not Into the Wild," provides details about proper handling and disposal of live seafood and seafood waste and is designed to prevent the introduction of marine and freshwater invasive seafood, such as finfish, crabs, oysters, clams, turtles, algae and any animals or plants that may travel on seafood and seafood products.

Invasive species are animals and plants that are introduced to new ecosystems, where they cause economic or environmental damage, or harm to human health. Each year, the United States spends an estimated $120 billion managing introduced species in terrestrial, freshwater and marine environments. This includes $1 billion trying to eradicate zebra mussels and quagga mussels and $100 million for green crabs.

Many pathways lead to these introductions. Invasive species can travel in ship ballast water or on the hulls of ships and boats; they can escape from aquaculture facilities or be inadvertently released during transport; they can introduced by aquarium owners who dump unwanted fish and plants into the wild; and they can be intentionally or accidentally released by seafood handlers and consumers.

The northern snakehead fish and the Chinese mitten crab are two examples of seafood that were released or dumped and are currently invading parts of the United States, causing environmental damage such as erosion and flooding. In addition, shellfish may spread human diseases such as cholera.

The pamphlet also draws attention to types of seafood that are illegal to possess in the United States, such as the northern snakehead, walking catfish and Chinese mitten crab.

Made possible by a grant from the National Sea Grant Program, the pamphlet is available in Chinese, Vietnamese, Khmer, Korean, Spanish and English.

For more information or to download the free pamphlet, visit http://massbay.mit.edu/seafood.