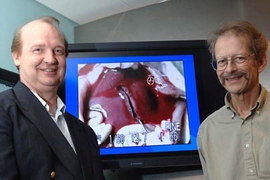 ↓ Download Image
Caption: MIT research scientist Rutledge Ellis-Behnke, left, and Professor Gerald Schneider bracket a monitor showing a transected liver after it has been treated with a liquid solution containing peptides. The peptides self-assemble into a gel that essentially seals over the wound. The two developed the technique with MIT colleagues and researchers at the University of Hong Kong.
Credits: Photo / Donna Coveney

Caption:
MIT research scientist Rutledge Ellis-Behnke, left, and Professor Gerald Schneider bracket a monitor showing a transected liver after it has been treated with a liquid solution containing peptides. The peptides self-assemble into a gel that essentially seals over the wound. The two developed the technique with MIT colleagues and researchers at the University of Hong Kong.
Credits:
Photo / Donna Coveney

MIT and Hong Kong University researchers have shown that some simple biodegradable liquids can stop bleeding in wounded rodents within seconds, a development that could significantly impact medicine.

When the liquid, composed of protein fragments called peptides, is applied to open wounds, the peptides self-assemble into a nanoscale protective barrier gel that seals the wound and halts bleeding. Once the injury heals, the nontoxic gel is broken down into molecules that cells can use as building blocks for tissue repair.

"We have found a way to stop bleeding, in less than 15 seconds, that could revolutionize bleeding control," said Rutledge Ellis-Behnke, research scientist in the MIT Department of Brain and Cognitive Sciences.

This study, which will appear in the online edition of the journal Nanomedicine on Oct. 10, marks the first time that nanotechnology has been used to achieve complete hemostasis, the process of halting bleeding from a damaged blood vessel.

Doctors currently have few effective methods to stop bleeding without causing other damage. More than 57 million Americans undergo nonelective surgery each year, and as much as 50 percent of surgical time is spent working to control bleeding. Current tools used to stop bleeding include clamps, pressure, cauterization, vasoconstriction and sponges.

In their experiments on hamsters and rats, the MIT and HKU researchers applied the clear liquid containing short peptides to open wounds in several different types of tissue -- brain, liver, skin, spinal cord and intestine.

"In almost every one of the cases, we were able to immediately stop the bleeding," said Ellis-Behnke, the lead author of the study.

Earlier this year, the same researchers reported that a similar liquid was able to partially restore sight in hamsters that had had their visual tract severed. In that case, the self-assembling peptides served as an internal matrix on which brain cells could regrow.

While experimenting with the liquid during brain surgery, the researchers discovered that some of the peptides could also stop bleeding, Ellis-Behnke said. He foresees that the material could be of great use during surgery, especially surgery that is done in a messy environment such as a battlefield. A fast and reliable way to stop bleeding during surgery would allow surgeons better access and better visibility during the operation.

"The time to perform an operation could potentially be reduced by up to 50 percent," said Ellis-Behnke.

Unlike some methods now used for hemostasis, the new materials can be used in a wet environment. And unlike some other agents, it does not induce an immune response in the animals being treated.

When the solution containing the peptides is applied to bleeding wounds, the peptides self-assemble into a gel that essentially seals over the wound, without harming the nearby cells. Even after excess gel is removed, the wound remains sealed. The gel eventually breaks down into amino acids, the building blocks for proteins, which can be used by surrounding cells.

The exact mechanism of the solutions' action is still unknown, but the researchers believe the peptides interact with the extracellular matrix surrounding the cells. "It is a completely new way to stop bleeding; whether it produces a physical barrier is unclear at this time," Ellis-Behnke said.

The researchers are confident, however, that the material does not work by inducing blood clotting. Clotting generally takes at least 90 seconds to start, and the researchers found no platelet aggregation, a telltale sign of clotting.

Other MIT researchers who are co-authors on the paper are Gerald Schneider, professor of brain and cognitive sciences, and Shuguang Zhang, associate director of MIT's Center for Biomedical Engineering. Collaborators at the University of Hong Kong Li Ka Shing Faculty of Medicine, Department of Anatomy, include Yu-Xiang Liang, David Tay, Wutian Wu, Phillis Kau and Kwok-Fai So, an MIT alumnus.

The research is funded by the Deshpande Center for Technological Innovation at MIT and the Technology Transfer Seed Fund at HKU.