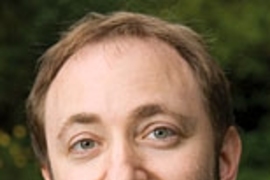 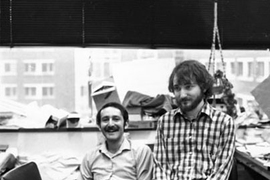 ↓ Download Image
Caption: Andrew Fire, right, who earned his Ph.D. from MIT in 1983, won the Nobel Prize in physiology/medicine on Oct. 2, 2006. In this undated photo taken at MIT when he was a student, he is shown with Mark Samuels, another grad student.
Credits: Photo courtesy / Philip Sharp laboratory

Caption:
Andrew Fire, right, who earned his PhD from MIT in 1983, won the Nobel Prize in physiology/medicine on Oct. 2, 2006. In this undated photo taken at MIT when he was a student, he is shown with Mark Samuels, another grad student.
Credits:
Photo courtesy / Philip Sharp laboratory
Andrew Z. Fire, who received his PhD from MIT in 1983 while working with Nobel laureate Phillip Sharp, has been awarded the Nobel Prize in Physiology or Medicine for 2006 together with Craig C. Mello for their discovery of RNA interference — gene silencing by double-stranded RNA.

"This is an absolutely revolutionary discovery, as indicated by the fact that [it] was made in 1998 and is being recognized with this prize only eight years later," said Sharp, an MIT Institute Professor.

In December 2002, Sharp called RNAi "the most important and exciting breakthrough of the last decade, perhaps multiple decades," when the phenomenon was named "breakthrough of the year" by Science magazine. Fire and Mello "have changed the future of biological science by providing insights into the ability of RNA to regulate gene expression," Sharp said at the time.

The genome operates by sending instructions for the manufacture of proteins from DNA in the nucleus of the cell to the protein-making machinery in the cytoplasm. These instructions are conveyed by messenger RNA (mRNA).

In 1998, Fire — now a professor at Stanford University's School of Medicine — and Mello, a professor at the University of Massachusetts Medical School in Worcester, published their discovery of a mechanism that can degrade mRNA from a specific gene. This mechanism, RNAi, is activated when RNA molecules occur as double-stranded pairs in the cell. Double-stranded RNA activates biochemical machinery that degrades those mRNA molecules that carry a genetic code identical to that of the double-stranded RNA. When such mRNA molecules disappear, the corresponding gene is silenced and no protein of the encoded type is made.

RNAi, which occurs in plants and animals, including humans, is key in regulating gene expression. It protects against RNA virus infections, especially in plants and invertebrate animals, and secures genome stability by keeping mobile elements silent.

Today, double-stranded RNA is used as a powerful tool to experimentally elucidate the function of essentially any gene in a cell. The discovery of RNAi has already had an immense impact on biomedical research and will most likely lead to novel medical applications in the future.

In a statement, Senator John Kerry of Massachusetts congratulated Mello and Fire, noting "their groundbreaking discoveries are revolutionizing medical research, and will surely help save thousands of lives." The two, with their ties to Massachusetts, "have made our state proud," said Kerry.

Soon after learning of the prize at "one something" in the morning California time, Fire talked to Adam Smith, editor-in-chief of the Nobel web site.

"The most immediate benefit [of RNAi] is going to be doing experiments that teach us things," Fire told Smith. "It's a basic research tool with some windows into potential therapeutics. I'll be as excited as anybody when it all pans out."

How did Fire and Mello get into the field? "We were led to it pretty much by our experimental noses," Fire told Smith. "I get drawn to unsolved questions that don't make any sense."

Sharp recalled that Fire entered MIT's PhD program in biology at the age of 19 after earning a bachelor's degree in mathematics from the University of California, Berkeley. "He's a wonderful, highly principled scientist" who is "a wonderful example for young scientists," said Sharp.

A version of this article appeared in MIT Tech Talk on October 4, 2006 (download PDF).