Student makes dough -- in the lab 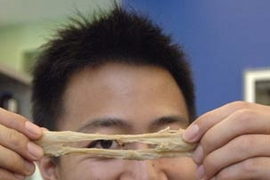 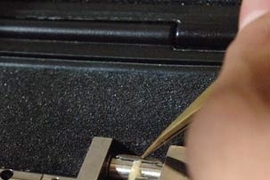 ↓ Download Image
Caption: A sample of dough stretched in Ng's lab is far too small for a cookie.
Credits: Photo / Donna Coveney

Caption:
A sample of dough stretched in Ng's lab is far too small for a cookie.
Credits:
Photo / Donna Coveney

Ng, an MIT mechanical engineering graduate student, is getting an education in dough. His Ph.D. thesis concerns the mechanical properties of matter--in this case, dough--and how it behaves when subjected to forces. In engineering-speak, this is called rheology, and it provides valuable information for commercial bakeries that need accurate, repeatable techniques for measuring the properties of dough to ensure the tastiest product.

Non-Newtonian fluids are unusual materials. Their viscosity, or slipperiness, changes with the amount of strain applied to them. Many non-Newtonian fluids have microscopic structures that affect how they react when poked or prodded, and how fast they move when they flow. Picture peanut butter or mayonnaise dripping from a tap--they would not behave like water. Some non-Newtonian fluids such as polymers bounce like a ball if dropped but flow smoothly if placed on a surface.

McKinley's research group looks at DNA, saliva, tree sap and okra, a natural polymer used as a food thickener for thousands of years. Snail slime and such oddities as magnetic fluids also are investigated.

Ng's work area in a corner of the Hatsopoulos Microfluids Laboratory contains a variety of dough-manipulating devices. To measure torque, or turning properties, the mixograph twists the dough around metal pins the way saltwater taffy is spun in a candy shop; the filament stretcher pulls the dough until it snaps.

To conduct experiments, Ng works with small samples of flour ground from grains newly developed by farmers and food engineers. He painstakingly records how the resulting dough is treated and how it reacts to manipulation, because different blends of flour, water and additives can result in drastically different dough. Atmospheric conditions and time of day also can affect the product's elasticity and rise.

Getting the dough to stay put can be a chore. "It sticks to pretty much everything other than the things you want it to stick to," Ng said.

Ng wasn't always cut out for dough. He completed a master's degree in aeronautical engineering from Cambridge University in England and arrived at the Gas Turbine Laboratory at MIT with the goal of designing airplane engines. Airplane engines are designed with air flow in mind, and Ng made the switch to "fluid mechanics of a different sort," he said, when he heard McKinley needed a dough man. Working with dough, he said, sounded like something "different and fun."

The research also has a serious side. For millennia, bakers have developed a feel for dough as they kneaded it. But this homespun approach isn't good enough for large commercial operations, which need "numbers" representing a material's properties during the manufacturing process, Ng said.

Ng helps define those properties while seeking a deeper understanding of the micro-structure of dough.

Gluten gives dough its distinctive elastic behavior. To engineers, gluten is a nanoscale bio-macromolecule, one of the largest protein compounds on earth. These proteins form an entangled matrix whose quality, shape and distribution within the dough are intrinsically linked to its bread-making qualities.

"The texture of bread--the chewiness and mouth feel--is dependent on the dough you start with," Ng said. "The airiness of the bread, or, from a commercial point of view, the amount of air they sell you, is directly related to the ability of the dough to resist rupture during the deformation process as it rises. When bread is in the oven, air bubbles within the dough expand. At some point they break, and the bread stops expanding."

Ng doesn't usually eat his experiments because the laboratory dough is covered with silicone oil to keep it from drying out. But since starting this line of research in 2003, Ng has become a home baker. When he bakes bread, he brings a bit of the dough in for testing. White bread, he said, is his favorite.

A version of this article appeared in MIT Tech Talk on September 27, 2006 (download PDF).