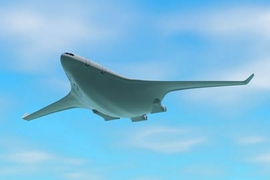 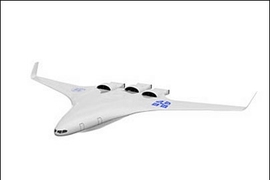 MIT and Cambridge University researchers will unveil the conceptual design for a silent, environmentally friendly passenger plane at a press conference Monday, Nov. 6, at the Royal Aeronautical Society in London.

"Public concern about noise is a major constraint on expansion of aircraft operations. The 'silent aircraft' can help address this concern and thus aid in meeting the increasing passenger demand for air transport," said Edward M. Greitzer, the H.N. Slater Professor of Aeronautics and Astronautics at MIT.

Greitzer and Professor Ann P. Dowling of Cambridge University are the lead principal investigators on the Silent Aircraft Initiative. This collaboration of 40 researchers from MIT and Cambridge, plus many others from more than 30 companies, was launched three years ago "to develop a conceptual design for an aircraft whose noise was almost imperceptible outside the perimeter of an airfield in an urban environment."

While originally conceived to make a huge reduction in airplane noise, the team's ultimate design also has the potential to be more fuel-efficient. In a typical flight, the proposed plane, which is designed to carry 215 passengers, is predicted to achieve 124 passenger-miles per gallon, almost 25 percent more than current aircraft, according to Greitzer. (For a down-to-earth comparison, the Toyota Prius hybrid car carrying two passengers achieves 120 passenger-miles per gallon.)

The project aims to develop aircraft by 2030.

The conceptual design addresses both the engines and the structure, or airframe, of a plane. Half of the noise from a landing plane comes from the airframe.

Other key features of the design include:

What will it take to turn the design into a plane by 2030?

"One major technical challenge is the integration of the propulsion system with the aircraft," Greitzer said. "The propulsion system, with engines embedded in the fuselage, is different than for traditional civil aircraft, in which the engines are located in nacelles below the wing. This presents a different set of issues to the designer."

Zoltan S. Spakovszky, C. S. Draper Associate Professor in MIT's Department of Aeronautics and Astronautics, also cited the integration of the propulsion system as a key challenge. Spakovszky and James I. Hileman, a research engineer in the department, are the chief engineers, or day-to-day managers, for the project.

He explained that in today's airplanes, with engines hanging below the wings, air flows unimpeded into the engine. In the new design, however, air traveling into the air intakes on top of the plane will behave differently. This is because the air particles flowing close to the plane's body experience friction. As a result, "the particles flow at a lower velocity near the surface of the plane than in the free (air) stream," Spakovszky said. The new engine must be designed to operate in these strongly nonuniform airflows.

A second important technical challenge involves the craft's unconventional airframe, Spakovszky said. "The structural integrity of a pressure vessel allowing this single wing-like shape needs to be ensured and poses a major challenge."

Greitzer emphasized that the collaboration between MIT, Cambridge University and their industrial partners was key to the end result.

"Collaboration and teaming occurred in essentially all aspects of the project. The Silent Aircraft Initiative has been very much an enterprise in which the whole is greater than the sum of the separate parts," he said.

Spakovszky referred to the overall team effort as the best part of the project. "Technical expectations were taken for granted, but working well across the Atlantic was not a given," he said. "It was a very, very neat experience."

The Silent Aircraft Initiative is funded by the Cambridge-MIT Institute, which has supported a wide range of research and educational collaborations between the two universities. The Knowledge Integration Community (or KIC) that created the conceptual design included academic staff and students from both institutions and participants from a wide range of industrial collaborators including Boeing and Rolls Royce.

A version of this article appeared in MIT Tech Talk on November 8, 2006 (download PDF).