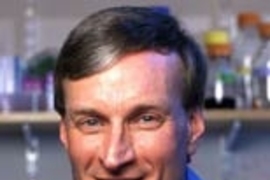 The board of directors for the Whitehead Institute for Biomedical Research has announced that Whitehead Member and MIT Professor of Biology David Page has been elected the fourth director of the Institute. Page takes this position following his appointment as interim director, which began in December 2004.

"The Whitehead board and I are delighted that David Page has been elected director of Whitehead," said Alex d'Arbeloff, chairman of the Whitehead Institute board of directors. "I have enjoyed working with David since last fall and have found that he has an amazing ability to listen and to lead. I know that David will make significant contributions to the future success of Whitehead, and I look forward to our continued association."

"I can't think of anyone else who I'd rather see leading the Institute at this point in time," said Susan Lindquist, Whitehead member and director of the Institute from 2001 to 2004. "Not only is David a brilliant scientist, but over the last year he's shown himself to be a leader."

"I believe the two roles of director and scientist enhance one another," said Page. "Keeping my feet planted firmly in the day-to-day life of the lab helps me be a more effective director. And likewise, being director helps me see my lab's work in the context of the Institute's scientific mission. To my mind, the Whitehead Institute is an artist colony extraordinaire. My vision is that in the years ahead we will continue to attract the best young minds and provide them a place to realize dreams."

Page's own research will continue to focus on the question of sex determination: How does the difference in genetics between males (who have an X and a Y chromosome) and females (who have two X chromosomes) result in such different development and morphology? This question has vexed scientists for years because it was commonly thought that the Y chromosome was mostly 'junk' DNA.

Page, who is also a Howard Hughes Medical Institute investigator, has a reputation as the scientist who gave dignity to the Y chromosome. "I often say that the Y is the Rodney Dangerfield of the chromosome world," Page has joked. "It gets no respect."

Page and his collaborators surprised the scientific world with two fundamental discoveries about the Y that reversed scientists' opinion of it. First, they discovered that the Y chromosome had quite a few genes and that these genes were required for male fertility.

Second, they found that the Y chromosome had an amazing architecture. Many of its genes are organized in palindromes, long stretches of DNA that read the same forwards and backwards -- a chromosomal equivalent of "Madam I'm Adam." If the first "M" on Madam becomes mutated, the chromosome could then fold into a hairpin and the "m" in Adam would then swap the appropriate genetic material. This self-correction mechanism permits the Y chromosome to maintain the integrity of its genes.