In wake of tsunami, MIT reaches out to community, raises funds for victims 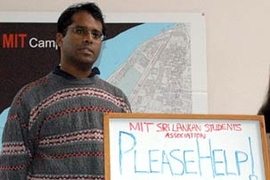 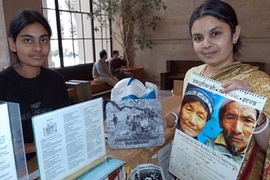 MIT has about 300 students and many other researchers and alumni from India, Sri Lanka, Thailand, Indonesia and other countries in southeast Asia where coastal areas were destroyed by the tsunami. Many of these members of the MIT community may have been visiting their homes when the tsunami crashed onto land Dec. 26.

Like countless families around the world, MIT is taking pains to contact students and other community members who may have been injured in the disaster.

The International Students Office sent an e-mail to students from affected countries on Dec. 29, asking them to "let us know that you are okay." Just over 80 of those students have responded to date, according to Danielle Guichard-Ashbrook, director and associate dean for international students. She anticipates hearing from many more students as phone and computer service is slowly restored to those areas.

"Though we are tremendously distressed as we see the rise in casualties and the horrific photos of the devastation, our deepest hope is that a natural disaster of this scale presents an opportunity for all nations to work together to assist their fellow human beings in need," the letter said. "Our thoughts and prayers are with you, your family members and your friends. Let us know if we can help in any way."

The MIT Alumni Association has set up an electronic message board for alumni and other community members to gain information about friends and family from South Asia.

Working together, three student organizations at MIT--the Association for India's Development-MIT (AID-MIT), Sangam, and South Asian American Students (SAAS)--set up donation collection booths in Lobby 10 and the Student Center from noon to 2 p.m. weekdays since Jan. 3, collecting donations to aid survivors of the tsunami that is estimated to have killed more than 156,000 people in 11 different countries.

The groups have raised close to $2,000. They plan to use some of the funds to purchase a community fishing boat, along with a supply of nets. The supplies would be donated to a fishing cooperative so many fishermen would benefit. With estimates from AID's contacts in Chennai, India, they expect the total cost to be around $3,000, said AID's Vidya Jonnalagadda, a postdoctoral associate in biological engineering who is from Hyderabad in Southern India.

Jonnalagadda, who has been collecting donations in Lobby 10, said she felt overwhelmed by the generosity and caring she has seen at MIT. "When we see students donating a crumpled dollar bill dug from the pocket of their jeans, it is really touching, because it perhaps represents their lunch money," said Jonnalagadda, adding that some people have been very emotional, which has been especially moving. "Really, it is not the dollar amount of the donation that is so touching, it is the concern that they show," she said.

AID is planning a dinner and silent auction to be held in Walker Memorial on Jan. 20 at 7 p.m. All proceeds will go towards tsunami relieft. On Jan. 8 the group helped organized an evening of drinks and music at Opal Lounge at 48-50 Winter St. in Boston to benefit tsunami relief. In addition, AID is holding a benefit dinner and art auction Jan. 16 at 6 p.m. at the Tantric Bar and Grill in Boston. AID-MIT has also set up a web site to post updates from the volunteers at their Chennai, India branch. Donations can be made via the Sangam web site.

Additional funds are being collected by the Sri Lankan Student Association (SLSA), which has raised nearly $1,400 in donations they collected at a booth in the lobby of Building E25. They will continue to collect money over the coming months to help with the reconstruction effort, said former SLSA president and postdoctoral associate Sanith Wijesinghe, who received his Ph.D. in aeronautics and astronautics in 2003. He is from Colombo, Sri Lanka, just under 15 miles from the coast; he planned to travel to his country on Jan. 6 to assess the situation himself and report back to the SLSA on his findings.

"The immediate need for medicine is a priority," said Wijesinghe who said he was grateful that his own family in Colombo is safe and well. He will spend the next month with them while he looks at funding more long term help in Sri Lanka such as rebuilding houses and buying fishing boats and nets to ensure an ongoing source of income for the many people whose livelihoods were wiped out by the tsunami. "There is a need to better protect children who are additionally vulnerable in disaster environments," he said. Wijesinghe plans to help allocate funds where he sees the greatest need.

Since so many countries were affected by the tsunami, the MIT Public Service Center (PSC) has been encouraging a variety of groups to collect funds, allowing those who donate to choose where to send money. "It makes a lot of sense for people to raise funds for the organizations they know or the communities that hold the strongest importance for them," said Sally Susnowitz, assistant dean and director of the PSC, which has also been collecting money both in their office (Room 4-104) as well as in Lobby 10.

In addition to funds raised for affected communities, the PSC is also raising money for a public service fellowship to send MIT students to Sri Lanka this summer to help with rebuilding. "The creativity and technical knowledge of MIT students will be extremely valuable to the community organizations that will be engaged in reconstructing communities this summer," said Susnowitz. This past year, Evan Freund, a graduate student in urban studies and planning who is involved with the PSC, spent time on a fellowship in Unawatuna, a Sri Lankan village that was destroyed by the tsunami.

"We feel a very personal connection," said Susnowitz. "With 150,000 dead and missing, I think we all appreciate the chance to feel that there's at least some way we can help the survivors and try to assist them to rebuild their lives and livelihoods."

Support staff at MIT will hold bake sales and raffles each Friday in January to raise funds for relief efforts of the Sewalanka Foundation and UNICEF. Assorted pastries, cookies and cakes contributed by members of the MIT community will be sold in Lobby 10 from 10 a.m. to 2 p.m. on Jan. 14, 21 and 28. Raffle tickets for special cakes and pies will cost $1. The winning ticket will be drawn each Friday at 1:45 p.m.

The Buddhist Community at MIT (MIT-Prajnopaya) has formed a direct alliance with the Sri Bodhiraja Foundation in Sri Lanka to collect funds for construction of 1,000 houses for the population in the villages regardless of their religious affiliation or ethnic background. This collaborative effort has already raised about $200,000 internationally. The construction of one house can be provided for about $1,200.

A board of directors representing various religious traditions has been appointed to supervise and monitor the efficiency of the work and present a report afterward, according to Tenzin L. Priyadarshi, the Buddhist chaplain at MIT.

"One of the issues that always concerns us is whether our contribution reaches those who are suffering. You can be assured that every dollar of your contribution is benefiting the victims directly," said Tenzin Priyadarshi, who will go to Sri Lanka to help with these relief efforts. He asks that contributions be sent to MIT-Prajnopaya, which is a 501(c)3 nonprofit organization, at 60 Hartwell Road, Carlisle, MA 01741, or to MIT-Prajnopaya in Room W11-004.

Diana Tavitian, co-founder of Adoptive Families@MIT, reports that area agencies have received numerous inquiries about opportunities to adopt children orphaned by the tsunami and its aftermath. In response, the Joint Council on International Children's Services (JCICS) warns it is "rarely possible or advisable" to attempt to adopt children in the wake of natural disasters. The agency recommends that families wishing to aid the children of these areas provide other forms of assistance, via reputable relief organizations. The full text of the JCICS statement on the legal and ethical issues of adoption can be found at http://www.jcics.org/Tsunami.htm.