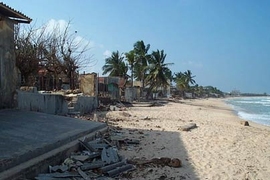 Postdoctoral associate Sanith Wijesinghe (Ph.D. 2003) is from Colombo, Sri Lanka, about 15 miles from the coast where the tsunami hit. Wijesinghe traveled to his homeland on Jan. 6 to help with relief efforts. This is the first of several reports he hopes to send to the News Office.

On Jan. 14, I headed to Trincomalee to help set up a medical field office in a refugee camp. The trip was coordinated with the help of the local Lion's organization and the Sri Lankan navy. Trincomalee, located on the northeastern coast of Sri Lanka, was one of the first locations to be hit by the tsunami.

On arrival we saw overturned fishing boats and bricks littered everywhere along the roads. Beach front property was completely devastated. Trincomalee beach was eerily quiet; it felt like we were walking through a ghost town.

We spoke with the owners of a guest house along the beach, who said the first wave arrived around 8.30 a.m. It flooded the first story of the buildings and washed away all unsecured furniture, clothes, books â€¦ everything. As this wave receded it left a quarter mile of seabed exposed and people gathered to investigate the unusual emptiness of the sea. Within a few minutes a second stronger wave, about 10 meters high, raced towards the beach and caught everyone by surprise. A quiet Sunday morning was transformed instantly into a horrific massacre.

As we headed north towards the refugee camp, we passed the popular tourist destination of Nilaveli beach. The famous hotel was gutted. Coconut trees and mangroves were dead or dying. It seemed like a huge fire had scorched the land. Buildings half a mile up the beach were destroyed.

Remarkably, a Hindu temple on the beach remained standing. Its exposed foundations indicated two to three feet of sand erosion. I took a picture of a small statue of the Hindu Lord Ganesh that had washed up. People had lighted incense sticks around it and were praying.

We set up our medical field office in a refugee camp in Kudurupitti, on the northern outskirts of Trincomalee, with four doctors and four nurses. We treated 270 patients. A team of Indian navy doctors stopped by and provided additional medical supplies.

There were no outbreaks of epidemics in this region; most people required only wound dressings and medicines for coughs and skin ailments. The relatively good health conditions indicate that access to clean water and food has not been a problem. The biggest unmet medical need is for psychological counseling. Local religious leaders and hospital psychiatrists have been asked to help, but there are not enough personnel to meet the overall demand. Training of additional social workers is an immediate priority.

The Trincomalee Lions provided details of the disaster management process. The Sri Lankan navy and the Liberation Tamil Tigers of Ealam coordinate relief efforts separately in the territories under their control. Each evening a consortium of non-governmental organizations and aid organizations meet to discuss the most immediate needs. We were told that teams from Spain, Italy, Russia, Austria, U.S., Britain, Switzerland and India were operational on various projects within and around Trincomalee. It was really encouraging to see the high level of participation by the international community. As of last week supplies of food, water and medicine were adequate and no further relief aid is required.

Rehabilitation and reconstruction is the next important step. There is still no clear plan of where to relocate the more than 1 million displaced people. A blanket construction ban in a beach buffer zone is being debated. Consistent implementation will be a huge political and logistical challenge. While several groups are ready to begin reconstruction, there is just no open land available to build on.

This is driving a fear that people will be stranded in refugee camps for a year or more.