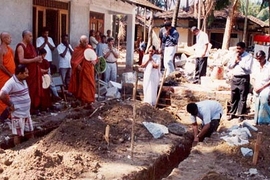 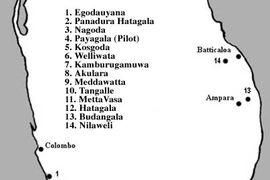 Sri Lankan families left homeless by the tsunami could find themselves living in an enclave of MIT-designed housing if the efforts of MIT's Buddhist chaplain and a researcher in the Department of Urban Studies and Planning are successful.

And there's every reason to believe they will be.

Immediately after the Dec. 26 tsunami hit, the chaplain, Tenzin L.S. Priyadarshi, formed an alliance between MIT's Buddhist community and the Prajnopaya Foundation, which is working with the Sri Bodhiraja Foundation in Sri Lanka to collect funds for rebuilding permanent housing near the Sri Lankan seashores. Priyadarshi and the Prajnopaya Foundation, along with the Committee of World Religions for Tsunami Efforts in Taipei, Taiwan, raised more than $130,000 by Jan. 15. On Feb. 27, the alliance dedicated 25 new homes, each built for about $1,200. They hope to build 1,000 homes altogether.

"Many people are still thinking about how to relocate the victims and how to build camps for the victims. But because of the Buddhist monks' involvement in this project, some new homes have already been built and are housing families," said Priyadarshi, who is a Buddhist monk from India. He explained that the Buddhist monks in Sri Lanka wield a great deal of influence with the Sri Lankan government, making it possible for them to work quickly.

The houses built by the alliance are being assigned to families on an as-needed basis, with the first homes going to single mothers who lost their husbands in the disaster.

Priyadarshi and Carlo Ratti, a research scientist in urban studies, are forming a team of MIT students and faculty to create a design model for building small homes (about 400 square feet) with indoor plumbing that can be built using local materials, mostly wood, which is better able to withstand ocean storms than the concrete block buildings that were there before.

"Building a cluster of these houses based on an MIT model would be a way for MIT to reach out and show compassion to the victims and to house people in a socially conscious way," said Priyadarshi.

The Prajnopaya Foundation was founded by the Dalai Lama and has no paid employees. All donations go directly to building the homes.

Another aspect of the MIT project is Ratti's work with the MIT SENSEable City Laboratory to create an electronic disaster alert system for Sri Lanka. A joint research proposal developed by MIT and the University of Moratuwa in Sri Lanka calls for an early warning system that could be set up through cellular service to allow for early evacuation.

For more information, contact Ratti at ratti@media.mit.edu or (617) 253-7926 or Priyadarshi at tenzin@mit.edu or visit www.prajnopaya.org.

A version of this article appeared in MIT Tech Talk on March 16, 2005 (download PDF).