Tsunami puts book and its editors in demand 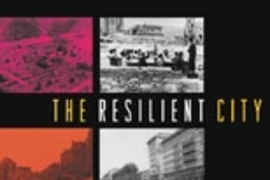 With the country still reeling from the Sept. 11 terrorist attacks, Professor Lawrence J. Vale and his colleagues in the Department of Urban Studies and Planning convened a major colloquium in the spring of 2002 to look at how modern cities recover from disasters.

The colloquium ran for several weeks and featured lectures and seminars by urban planners, writers and historians. Its focus was not only on the nuts and bolts of disaster recovery, but on the broad concept of urban resilience--on how cities manage to persevere through even the most catastrophic events.

The project was intended to produce a book, which Vale and co-editor Thomas J. Campanella, formerly of MIT and now at the University of North Carolina, spent the past few years putting together. As fate would have it, the book's publication date coincided with another monumental tragedy, the tsunami in South Asia.

Vale, who heads the urban studies department, and Campanella suddenly found themselves much in demand on the news media circuit. Their book, "The Resilient City: How Modern Cities Recover from Disaster" (Oxford University Press), became a resource as people struggled to make sense of the tsunami.

But is there really a connection between, say, the Chicago fire of 1871 or the civil war in Beirut and the giant waves that washed away the beaches of several Indian Ocean countries?

"I think the book applies both narrowly to the traumas of particular cities, but more broadly to questions about priority-setting," Vale said.

"Who chooses which places to rebuild first? What does this tell us about the power structure of the country that has been devastated? How is the built environment used to symbolize key moments of resilience?" he asks.

As many of the essays in the book indicate, there are certain predictable patterns of rescue, restoration, rebuilding and remembrance that are common to any major disaster. But it is the variations to these patterns that bear further examination, and each essay tells a unique and compelling story.

According to Vale, most survivors of major disasters, at least those spared a loss of family members, seem to find ways to partake in a progress-oriented view of a disaster's aftermath, focusing on opportunities to improve conditions over what had prevailed prior to the catastrophe. But despite the fact that some progress always does get catalyzed by disaster, "resilience often entails bouncing back to the profoundly unequal conditions that prevailed before the sudden traumatic change occurred," said Vale.

Probably the biggest priority competing with the wish to aid survivors--at least in southern Thailand and Sri Lanka--is the wish to restore confidence to the tourism industry. And this in itself "will be a promoter of forward-looking and optimistic kinds of scenarios, especially with something like a tsunami that no one expects to happen again in that place anytime soon," Vale said.