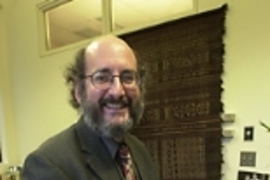 Caption:
Lawrence Vale, the new head of the Department of Urban Studies and Planning, relaxes in his office.
Credits:
Photo / Donna Coveney

Professor Lawrence J. Vale, appointed head of the Department of Urban Studies and Planning in June, describes his lifelong passion for the dynamic lives of cities as "almost prenatally determined."

Vale, a Chicago native, lived with his family in a 21st-floor apartment in an iconic building designed by Mies van der Rohe.

"I could look out the window and see a planned waterfront," he recalled. "I knew about Chicago's dramatic recovery and rebirth after the Great Fire of 1871. I was nurtured in an environment where people had thought systematically about the public realm and its potential impact on future generations."

Vale, 43, attributes his long-standing interest in American public housing to another early childhood experience. "In 1962, I watched the high-rise towers of the Cabrini-Green public housing project take shape. From that point on, my family took detours to avoid driving past this increasingly notorious neighborhood," he said.

Vale left Chicago to attend Amherst College, later settling in Boston. Once here, he noticed that "aversion to public housing had been architecturally encoded into the city. The Kennedy Library's public rooms faced every direction except that of the neighboring Columbia Point project. The observation deck of the John Hancock tower allowed views of the city's affluent neighborhoods, but blocked the sight of neighborhoods that tended to be poor and black."

Coincidentally, Vale attended the same Chicago grade school as visionary urban designer Kevin Lynch (B.C.P. 1947). Lynch was the author of "The Image of the City," a seminal work on city planning. Lynch taught city planning at MIT for more than 30 years.

"Lynch was the main intellectual force behind the department," Vale said. "I arrived at MIT shortly after Lynch's death, but his work and approach to the field continue to inspire me."

Likening DUSP to a "large optometrist's store, where students are presented with a vast selection of frames and lenses through which to see the world," Vale emphasized the necessity for courses at MIT to have "clear resonance in current events.

"By asking students to examine planning processes in wide-ranging locales such as Boston, Rotterdam and Mexico City, we invite them to learn about societies or regimes that support or resist the very notion of planned intervention," he said.

"One central question underpinning the department's inquiry is: 'Who benefits from development?' In the post-Sept. 11 context, this means asking about the global and local effects of modernization, industrialization, westernization and north-south inequality. The question undergirds all large projects in the public realm," said Vale.

At that time, Vale announced a new student prize for work related to the City of Cambridge, named in honor of O. Robert Simha (M.C.P. 1957), director of planning at MIT for more than 40 years, and a new fund to reward "exemplary second-year master's students who were initially admitted without financial aid."

In his forthcoming book, "Reclaiming Public Housing: A Half Century of Struggle in Three Public Neighborhoods" (Harvard University Press), Vale explores the political, social and economic issues of public housing in South Boston, Brighton and Dorchester. He is the author of four earlier books: "Imaging the City: Continuing Struggles and New Directions," edited with Sam Bass Warner Jr. (Rutgers, 2001); "From the Puritans to the Projects: Public Housing and Public Neighbors" (Harvard University Press, 2000); "Architecture, Power and National Identity" (Yale University Press, 1992); and "The Limits of Civil Defence in the USA, Switzerland, Britain and the Soviet Union: The Evolution of Policies Since 1945" (St. Martin's, 1987).

"From the Puritan to the Projects" was named best book in urban affairs by the Urban Affairs Association in 2001. "Architecture, Power, and National Identity" won the Spiro Kostof Book Award in Architecture and Urbanism in 1994.

Among Vale's other awards and honors are a Rhodes Scholarship (1982-85) and a 1995-96 Guggenheim Fellowship for work on American public housing. He received an MIT Provost's Humanities, Arts and Social Sciences Grant for 1999-2000 and held the Edward H. and Joyce Linde Career Development Chair from 1990-91.

A version of this article appeared in MIT Tech Talk on October 30, 2002.