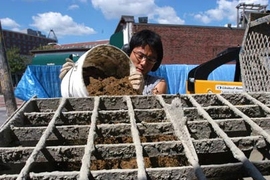 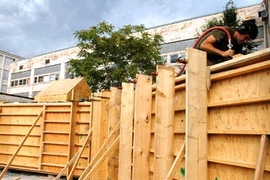 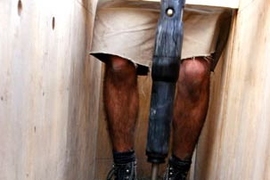 Caption:
A team of MIT architecture students built a wall behind the MIT Museum by following an ancient construction technique known as "rammed earth." Here, graduate student Shuji Suzumori prepares the mixture of Boston Blue Clay, sand and gravel that was used to build the wall.
Credits:
Photo / Donna Coveney

Local architects looking for sustainable building materials might try the dirt under their feet, say a team of architecture students at MIT, who built a garden wall using an ancient construction technique called "rammed earth" to test the method with New England soils.

The team built its test wall behind the MIT Museum on Massachusetts Avenue in Cambridge using a combination of 30 percent Boston Blue Clay mixed with sand and gravel. Twelve tons of this clay, common at depths of 30 to 60 feet in the metropolitan Boston area, came from the excavation site of a new building at Harvard. The excavation firm, J.F. White, donated the clay to the MIT crew.

"The wall will serve as a long-term test of rammed earth in New England, allowing us to observe the way various soil types used in construction stand up to the climate," said Joe Dahmen, a graduate student in architecture who is leading the project. Dahmen has traveled extensively worldwide to study traditional and contemporary rammed-earth architecture, which is gaining popularity in many regions of the industrialized world, including the southwestern United States, California and even in areas with high rainfall and freezing temperatures like Boston, Dahmen said.

Rammed earth can be used as a substitute for concrete in structures that don't need to withstand high forces. A rammed earth structure can withstand material stresses of up to 700 psi, while standard concrete can take more than four times that, about 3,000 psi. Even so, Dahmen says a rammed earth wall can withstand centuries of wear and tear, as proved by numerous extant buildings, including the Alhambra, a Moorish fortress in Spain built 1,200 years ago.

The MIT team's finished wall is 70 feet long, 6 feet tall and 1.5 feet thick, with a steel and wood gate in the middle to allow vehicular and pedestrian access. It will be covered with a cap made of weathering steel to shelter it from direct precipitation from above. The wall helps form a courtyard that can be used for other large-scale architectural and art installations.

Dahmen and undergraduate Teagan Andres, technical instructor Charles Mathis, and graduate student Shuji Suzumori and a number of student volunteers worked on the wall for about one and a half months this summer, putting in 800 labor hours. The project grew out of conversations between Dahmen and his advisor, Professor John Ochsendorf of architecture, whose research focuses on traditional building methods.

To build the wall, the workers densely packed layers of the clay mixture into the cavity of a wooden form with the help of a pneumatic compactor. (In traditional construction techniques, workers used a large wooden block mounted on a handle.) Once the clay has been fully packed and the form removed, a solid, monolithic wall remains. In "slip forming," the wooden formwork can be moved, enabling construction of large walls with a minimum amount of formwork, Dahmen said.

The earthen wall has one primary advantage over concrete -- environmental sustainability, according to Dahmen and Ochsendorf, who say that a conservative estimate attributes 7 percent of CO2 emissions worldwide to the production of cement, the primary ingredient in concrete. By contrast, preparation of a rammed earth mixture produces very little CO2 and uses no toxic chemicals. And, they point out, a building made of rammed earth creates no disposal hazard when demolished.

The technique results in a wall with an "aesthetic beauty that reflects its natural origins," said Dahmen, who hopes the blue-gray wall will last indefinitely. "The texture contains subtle variations in color and density corresponding to the layering of soil during compaction, almost like sedimentary stone. Part of the appeal is that the material is massive but rather delicate; we expect that the surface will erode somewhat over time, registering the elements acting upon it. But it's thick enough that this should not pose a problem.

"Parts of the Great Wall of China, which has been around for over 2,000 years, are built of rammed earth. Our project attempts to update this ancient environmentally sustainable building technique to test its relevance in the industrialized world," said Dahmen.

A version of this article appeared in MIT Tech Talk on September 21, 2005 (download PDF).