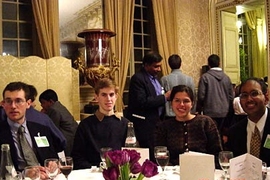 Three MIT undergraduates and a recent alumna will represent United States physics students at a conference in Paris this week where Nobel laureates, other eminent scientists, and 500 outstanding students from around the globe will discuss the future of physics and physicists, the impact of physics on daily life, and the importance of physics research for socio-economic development in the 21st century.

"We are very proud of these students' achievements. We are delighted that they chose to study physics here at MIT where they have taken advantage of the breadth of our research opportunities and the flexibility of our programs," said Thomas J. Greytak, associate head of the Department of Physics.

The Jan. 13-15 Physics for Tomorrow conference officially launches the World Year of Physics 2005. This international celebration is timed to coincide with the 100th anniversary of Albert Einstein's "miraculous year," when he revolutionized much of science with three groundbreaking advances.

The four students affiliated with MIT received scholarships from U.S. physics organizations to attend the historic meeting. They are Chintan Hossain, a sophomore double major in physics and brain and cognitive sciences; Benjamin Schwartz, slated to graduate in 2006 with a degree in physics with electrical engineering and math; Sean Markan, a junior studying physics, math and computer science; and Natalia Toro (S.B. 2003, physics and math), who is now a physics graduate student at Harvard.

The 500 students attending the conference were selected from among the best physics students of their respective countries, including many veterans of International Physics Olympiads. They represent 80 countries.

"These students represent the future of physics and we are proud to be joining the American Physical Society and the American Institute of Physics in sponsoring four U.S. Physics Olympiad alumni," said Bernard Khoury, executive officer of the American Association of Physics Teachers, referring to the MIT attendees.

One hundred years ago Einstein proved the existence of atoms and molecules, validated the emerging field of quantum mechanics, and developed the theory of special relativity, which led to the most famous equation ever written, E=mc2.

The United Nations has officially declared 2005 the International Year of Physics, and more than 30 nations are participating in the year-long celebrations with public lectures, museum exhibits and educational projects.

The Physics for Tomorrow conference is sponsored by UNESCO and a dozen international physics organizations.