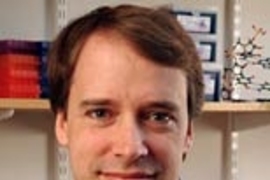 Professor David Bartel of biology and the Whitehead Institute for Biomedical Research is among 43 scientists around the country named Howard Hughes Medical Institute investigators on March 21. He joins 11 other MIT faculty members with that title.

A medical research organization, HHMI chooses investigators based on their potential to make significant contributions to science. Becoming an HHMI investigator isn't easy. Some 320 U.S. scientists were nominated this year, and competitions only occur every few years. Currently there are about 300 HHMI investigators in the United States.

HHMI investigators remain at their original institutions, but HHMI pays their salaries and funds the bulk of their research. Emphasis is placed on the researcher's overall scientific track record rather than on individual projects. "That's really the dream of every scientist--to have that support to do what you think is most exciting regardless of the risk," Bartel said.

Bartel's research concerns microRNAs, molecules that play an active role in regulating the genomes of both plants and mammals by interrupting a gene's ability to produce protein. It wasn't until 2000 that scientists were aware that these molecules existed in humans. Now, as shown in a recent Cell paper, Bartel and colleagues have found that more than one third of the human genes are at least partially controlled by microRNAs. And, Bartel said, that number is a conservative estimate.

"What HHMI is really doing is honoring and endorsing my whole lab," Bartel said. "It isn't mainly me, but the work of all the students, postdocs and others, plus our collaborators, who have made our lab what it is."

A version of this article appeared in MIT Tech Talk on March 30, 2005 (download PDF).