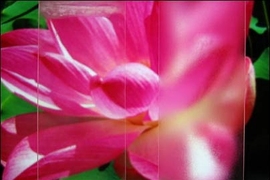 ↓ Download Image
Caption: Image shows two glass slides on top of a photo of a lotus flower. Both slides were placed in a freezer then brought out into humid air before being positioned over the photo. Slide #1 is coated with MIT's anti-fogging coating, Slide #2 is not.
Credits: Photo courtesy / Rubner, Cohen labs, MIT

Caption:
Image shows two glass slides on top of a photo of a lotus flower. Both slides were placed in a freezer then brought out into humid air before being positioned over the photo. Slide #1 is coated with MIT's anti-fogging coating, Slide #2 is not.
Credits:
Photo courtesy / Rubner, Cohen labs, MIT

Foggy windows and lenses are a nuisance, and in the case of automobile windows, can pose a driving hazard. Now, MIT scientists may have found a permanent solution to the problem. The team has developed a unique polymer coating--made of silica nanoparticles--that they say can create surfaces that never fog.

The transparent coating can be applied to eyeglasses, camera lenses, ski goggles â€¦ even bathroom mirrors, they say. The new coating was described Aug. 29 at the national meeting of the American Chemical Society.

Researchers have been developing anti-fog technology for years, but each approach has its drawbacks. Some stores carry special anti-fog sprays that help reduce fogging on the inside of car windows, but the sprays must be constantly reapplied to remain effective. Glass containing titanium dioxide also shows promise for reduced fogging, but the method only works in the presence of ultraviolet (UV) light, researchers say.

"Our coatings have the potential to provide the first permanent solution to the fogging problem," says co-study leader Michael Rubner, the TDK Professor of Materials Science and Engineering. "They remain stable over long periods, don't require light to be activated and can be applied to virtually any surface." Coated glass appears clearer and allows more light to pass through than untreated glass while maintaining the same smooth texture, said Rubner, who collaborated on the work with Robert Cohen, the Raymond A. and Helen E. St Laurent Professor of Chemical Engineering.

The coatings consist of alternating layers of silica nanoparticles, which are basically tiny particles of glass, and a polymer called polyallylamine hydrochloride, both of which are relatively cheap to manufacture, Rubner says. He has applied for a patent on the manufacturing process and says that the coating could be available in consumer products in two to five years. The military and at least two major car manufacturers have already expressed interest in using the technology, he says.

When fogging occurs, thousands of tiny water droplets condense on glass and other surfaces. The droplets scatter light in random patterns, causing the surfaces to become translucent or foggy. This often occurs when a cold surface suddenly comes into contact with warm, moist air.

The new coating prevents this process from occurring, primarily through its super-hydrophilic, or water-loving, nature, Rubner says. The nanoparticles in the coating strongly attract the water droplets and force them to form much smaller contact angles with the surface. As a result, the droplets flatten and merge into a uniform, transparent sheet rather than forming countless individual light-scattering spheres. "The coating basically causes water that hits the surfaces to develop a sustained sheeting effect, and that prevents fogging," says Rubner, who is director of MIT's Center for Materials Science and Engineering.

The same coatings also can be engineered to have superior anti-reflective properties that reduce glare and maximize the amount of light passing through, an effect that shows promise for improving materials used in greenhouses and solar cell panels. So far, the coating is more durable on glass than plastic surfaces, but Rubner and colleagues are currently working on processes to optimize the effectiveness of the coating for all surfaces.

This work was funded by the Defense Advanced Research Projects Agency (DARPA) and the National Science Foundation.

A version of this article appeared in MIT Tech Talk on September 14, 2005 (download PDF).