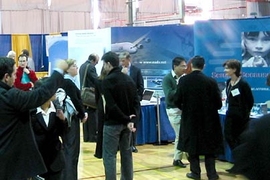 ↓ Download Image
Caption: Students and representatives from European companies mill about MIT's Rockwell Cage during the European Career Fair, the only fair of its kind in the U.S.
Credits: Photo courtesy / Michael Koeris

Caption:
Students and representatives from European companies mill about MIT's Rockwell Cage during the European Career Fair, the only fair of its kind in the U.S.
Credits:
Photo courtesy / Michael Koeris

Job seekers came to Rockwell Cage from as far away as Illinois and Quebec last weekend for the chance to interview with representatives of 43 international firms at MIT's European Career Fair, the only fair of its kind in the U.S.

More than 2,500 people attended the fair on Friday, Jan. 28 and interviewed with companies through Sunday, Jan. 30. The organizers, members of the MIT European Club, collected more than 3,100 resumes of candidates from MIT, Harvard and area colleges in advance, and arranged 385 interviews beforehand.

Now in its ninth year, the fair is one of the leading European-focused recruiting events in the United States. Club members initiated the fair in 1996 to facilitate the recruiting and interviewing of candidates for European branches of U.S. firms and for European companies. The first year, they collected 300 resumes.

"One company's representative praised the fair for its 'absolutely professional organization and stellar candidates,'" said Michael Koeris, a visiting scholar in the Department of Biology who was born in Hungary and grew up in Germany. Koeris co-chaired the fair with Alexander Schellong, another German member of the club who is a fellow at Harvard's Kennedy School of Government. Each put in about 60 hours a week in the weeks leading up to the fair and about 100 hours the week before. They were helped by about 35 club volunteers, who put in about 10 hours a week.

The European Club is already planning for next year's fair, Feb. 3 to 5.