Mun memorialized in service at MIT 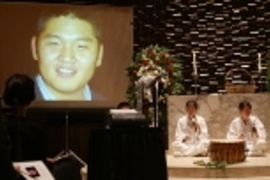 ↓ Download Image
Caption: Members of Oori, MIT's Korean drum group, perform at the memorial service for Daniel Mun, as images of the 20-year-old student are projected onto a screen.
Credits: Photo / DANIEL BERSAK 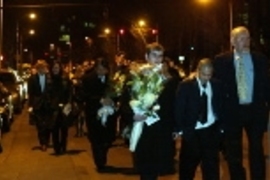 Caption:
Members of Oori, MIT's Korean drum group, perform at the memorial service for Daniel Mun, as images of the 20-year-old student are projected onto a screen.
Credits:
Photo / DANIEL BERSAK

"He was full of love for all the world ... and his friends."

With those words, Chi Phi member Dexter Ang began an evening of remembrances for his roommate Daniel "Dong" Mun at an often emotional memorial held Wednesday night (March 3) in the MIT Chapel.

The popular 20-year-old biology major from Kirksville, Mo., had been listed as missing from his fraternity house in Boston for nearly three months. His body was discovered last weekend in the Charles River. Ang and other fraternity brothers organized the memorial at which an overflow crowd joined Mun's family, friends and President Charles M. Vest in a solemn tribute.

Frequent laughter and heavy sobs hung in the chapel air as Mun was described as fun-loving, thoughtful, determined and "an amazing" companion. The stocky Mun was jovial and "always willing to do something for a laugh," said Lowery Duvall, a junior in aeronautics and astronuatics and chapter leader of Chi Phi.

Friend Jeffrey Hsu, said "he was a big guy with a big tender heart. His favorite movie was not some macho movie but 'Notting Hill,' which he'd watch twice in a row."

For those like himself who choose to teach at universities because "we like young people and believe in their potential, nothing is more painful than the death of a student. We are mystified; we are hurt," President Vest said.

A lively and touching slide montage featuring dozens of photos of a smiling, frolicking and mugging Dong Mun played twice during the one-hour program. His parents, Dr. and Mrs. Andy Mun, sat quietly in the front row throughout the service. His brother Thomas, a student at Gallaudet University, sat nearby sobbing.

Following the program which also featured a performance by Oori, a Korean drum group which counted Dong as a member, his friends followed family members from the chapel in a procession to the center of the Massachusetts Avenue bridge, where flowers were tossed into the Charles River.
Mun was cremated earlier in the day.