Social Security can be saved, but not by Bush proposal, Diamond says 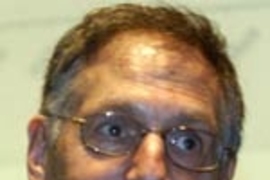 Economist Peter A. Diamond, winner of the 32nd James R. Killian Faculty Achievement Award, compared the fiscal status of the U.S. Social Security trust fund with public perceptions and summarized proposals for reforming the program in an hour-long lecture on March 15.

Diamond, an Institute Professor and professor of economics since 1970, just finished a year as president of the American Economic Association and is author or co-author of more than 120 publications.

A specialist in economic analysis of taxation and analysis of Social Security policy, Diamond was quick to allay fears that the 70-year-old program is about to go bankrupt.

Displaying a chart in which the fund seemed to bottom out completely in 2042, Diamond noted, "A lot of people, particularly young people, believe that this chart means they will get no benefits, nothing, zero. But getting nothing is just not in the cards." As the next chart showing the cash flows of the system indicated, the projected tax revenues in 2042 are sufficient to pay three-quarters of the benefits under current law--which would be a higher average level than today in inflation-adjusted dollars.

Pressures on Social Security are real, and meaningful reform is needed so the program can respond to them effectively, he said.

Increased life expectancy and a widening earnings gap between rich and poor are already taking their toll on the fund's actuarial balance, he noted. And the history of generosity to the earlier generations of beneficiaries implies that there are fewer assets in the system than if there had been less generosity. Diamond noted that reform should pay particular attention to the plight of impoverished Americans for whom Social Security benefits comprise their entire income.

Diamond presented a reform package that he designed together with Peter Orszag of the Brookings Institution, which they have written about in a recent book, "Saving Social Security." He showed that modest changes to benefits and revenues would be sufficient to put the system on a sustainable path. He also showed problems with individual account proposals--shortcomings for workers and their families, and implied difficulties for financing Social Security.

When asked about the more severe financial problems of Medicare, he gave his preferred approach to the larger issue of medical care and research: "First, put in place a system of universal coverage so that everybody in the country has health insurance, and then focus on cost containment."

Diamond, a warm and persuasive speaker, relied on a series of line and bar graphs, spiced up with New Yorker cartoons, to illustrate his points. He also kept the dizzying numbers ("trillions" for the deficit, for example) from devolving into utter abstraction by acknowledging human vulnerability. He described the greater poverty problems of elderly widows and the evidence on the difficulties many people have in making investments or thinking about money in a way that will give them adequate resources after their career lives end.

"Economists have studied how people make investment choices and the answer is, large numbers do it very badly," Diamond said. He also noted the need for and use of commitment strategies by people having trouble saving enough, drawing a parallel with experiments that have shown a similar approach by pigeons to food.

"From the point of view of Social Security, it's essential to keep a system that adjusts for inflation because, left to their own devices, people won't do a good job at that," he noted.

The Bush administration's push for individual retirement accounts to replace Social Security lacks contact with both psychological and economic reality, Diamond said. Current proposals are a "curious exercise--borrowing money from the public to lend it to workers to invest and then pay the government back through reduced traditional benefits. Such an approach would greatly increase the amount of debt held by the public," he said.

In recognition of the aging U.S. population and the slowing growth of the labor force, the administration should increase revenues to Social Security by requiring everyone, including all newly hired state and local workers, to pay Social Security taxes; it should raise Social Security taxes of very high earners; and it should prepare to raise some taxes and cut some benefits across the board, Diamond said.

The Killian Award was established in 1971 to "recognize extraordinary accomplishments by full-time members of the MIT faculty." The awardee is chosen by a faculty committee. It is the highest honor the faculty can bestow on one of its members.